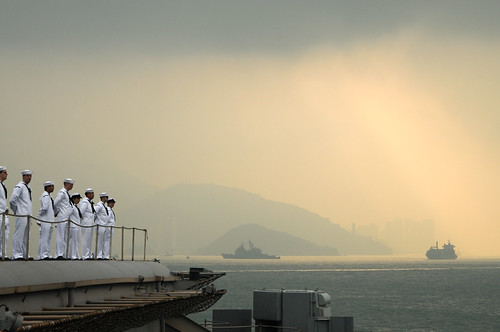 The port visit not only offered Sailors an opportunity for rest and relaxation, it also provided an opportunity to strengthen the relationship between the two United States and China.

"At the conclusion of this port we have a lot of new friends, a lot of stronger friends and the opportunity to do more and more and more every time we come here," said Capt. David A. Lausman, commanding officer of nuclear powered aircraft carrier USS George Washington (CVN 73). "The nice thing about being the Navy's forward-deployed aircraft carrier is that we operate and deploy every year and we have ample opportunity for repeat visits to every port that we go to which plays a huge roll in strengthening friendships and understanding of every maritime partner throughout the western Pacific."

To kick off the port visit, George Washington hosted a reception and welcomed aboard more than 600 Hong Kong residents including Chinese military officers and prominent business leaders. "I had a chance to talk to a good number of officers," said Ernest Chan, a Hong Kong business man. "I learned about their jobs on the ship and the [military] career sounds wonderful. The entire experience was an eye-opener for me."

Americans living in Hong Kong returned the favor the following night by hosting a reception at the American Club for members of the strike group high atop a skyscraper providing an impressive view of the city which today boasts a population of seven-million people.

Sailors spent their liberty enjoying the sights and scenery of Hong Kong and everything it has to offer; from experiencing exotic foods to shopping districts and tours to the world's largest sitting Buddha.

" Hong Kong was a great port, it was my favorite of the three [so far] just because there was a lot more to see, it's really diverse," said Aviation Electrician's Mate Airman William Burke, from Las Cruces, New Mexico. "The sights were great, it was fairly easy to get around and it was relatively inexpensive."

During the port visit, Sailors participated in various Morale, Welfare and Recreation (MWR) tours and gave back to the local community through Community Service (COMSERV) projects. "The COMSERVs allowed our volunteers to share the experiences of they've learned throughout their military careers while actually helping people," said 17-year veteran, Aviation Boatswain's Mate (Fuel) 1st Class Paul Hryhorenko, the COMSERV leader for one of the 12 events George Washington Sailors participated in while in Hong Kong.

Back aboard George Washington, the Navy's only fulltime forward deployed aircraft carrier, the ship hosted tours for school children, an orphanage, sports teams, church groups and families of U.S. Consulate staff members; more than 1,000 people in all.

George Washington began her patrol on June 12, 2011 and has logged more than 11,000 nautical miles, operated with nearly a dozen different countries and made additional port visits to the Kingdom of Thailand, Republic of Korea and Singapore.