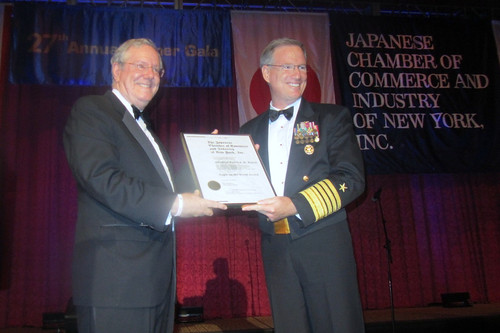 NEW YORK (Nov. 15, 2011) Adm. Patrick Walsh, commander of U.S. Pacific Fleet, is presented the "Eagle on the World" award by Steve Forbes on behalf of the Japanese Chamber of Commerce and Industry of New York, Inc. (JCCI) at its 27th Annual Dinner Gala. (U.S. Navy photo)

PEARL HARBOR - Adm. Patrick M. Walsh, commander of the U.S. Pacific Fleet, was presented with the "Eagle on the World" Award by the Japanese Chamber of Commerce and Industry of New York, Inc. (JCCI) at its 27th Annual Dinner Gala at the Hilton's Grand Ballroom in New York, Nov. 15.

The award symbolizes worldwide peace, freedom and prosperity and is given to individuals who have demonstrated exemplary leadership in strengthening U.S.-Japan relations and international affairs. Walsh received the award for his role as commander of the U.S. Joint Support Force (JSF) during Operation Tomodachi, a humanitarian assistance and disaster relief effort conducted in response to the March 11 earthquake, tsunami, and subsequent radiological crisis that impacted northeastern Honshu, Japan.

"I am honored, I am grateful, and I am humbled for the privilege to stand here tonight and represent the men and women of our armed forces who participated in an important operation under extraordinary conditions at a remarkable time in history," said Walsh.

Operating in support of the Japan Self Defense Force relief and recovery effort, the JSF directed U.S. military forces involved in Operation Tomodachi, which means friend or friendship, consisting of more than 20 U.S. Navy ships, 140 aircraft and nearly 20,000 personnel. The JSF also coordinated the delivery of more than 260 tons of supplies to hundreds of thousands of displaced people who were affected by what has been described as a cascading set of casualties.

"In the immediate aftermath of the earthquake and tsunami in Japan, we were incredibly impressed by Adm. Walsh's leadership of the U.S. Pacific Fleet through Operation Tomodachi," said Tsutomu Karino, JCCI's Executive Director. "And we're compelled to present him at this year's annual dinner with JCCI's highest honor, the Eagle on the World Award, in recognition of this outstanding assistance and contribution to Japan."

During his acceptance speech (read the remarks here), Walsh highlighted the importance of the strong relationship that exists between the U.S. Navy and the Japan Self-Defense Force and how this relationship not only impacted the success of the operation, but how it was strengthened and is poised to face future challenges together.

Walsh is the first active duty member of the U.S. military to receive the Eagle on the World Award since its inception in 1985. Previous award winners include former Vice President Walter Mondale; former Secretaries of State, Dr. Henry Kissinger, George Schultz, and Cyrus R. Vance; former Secretary of Defense William J. Perry; legendary golfer and philanthropist Arnold Palmer, and other prominent political and sports figures as well as media and entertainment industry leaders.