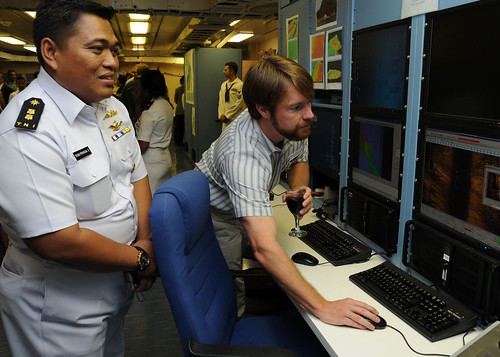 JAKARTA - The Military Sealift Command (MSC) oceanographic survey ship USNS Henson (T-AGS 63) completed of a month-long, bilateral survey mission with the Indonesian Navy Nov. 16, one of the largest in three decades of hydrographic surveys between the two countries.

With an embarked team of 13 U.S. oceanographers and hydrographers from NAVOCEANO, five Indonesian surveyors and 23 merchant mariners the Henson surveyed territorial waters off Indonesia's coast including the Java Sea and the Sunda Straits from Oct. 14 to Nov. 14.

"Liaison officers from the Indonesian Navy participated in all phases of the data collection and processing during the survey and were a crucial part of the team," said U.S. Navy Capt. Greg Ulses, Deputy Hydrographer of the Navy.

Both U.S. and Indonesian officers commented on the superb cooperation between both Navies during the survey.

USNS Henson's civilian master, Capt. Joe Goodwin, added, "This survey was a great opportunity (for us) to exchange ideas, discuss procedures, and gain a better understanding of oceanography and hydrography."

Lt. Cmdr. Anom Hascaron of the Indonesian Navy echoed Goodwin's sentiment. "This was my first opportunity to work with the U.S. Navy. It was a great experience to be able to ride aboard the Henson and do survey activities; I learned a lot related to hydrography surveying, and enjoyed exchanging knowledge."

Henson collected hydrographic and oceanographic data for nautical charting in Indonesia territorial waters by using sophisticated sonar technology to create three-dimensional maps of the sea floor. Sensors were also used to measure water temperature, salinity, and currents in the ocean.

Once all the data were analyzed, it was determined that a charted wreck and some charted shoals were incorrectly marked on existing charts by up to a half- mile. The team also found evidence of sand waves in the surveyed area, and discovered two charted buoys missing.

"The data collected will be used by both navies to address shared navigation concerns," said Ulses. "Our partnership with the Indonesian navy is very important to us, and we're hopeful that this survey will allow us to strengthen and deepen it."

NAVOCEANO is the largest subordinate command within the Naval Meteorology and Oceanography Command, and is responsible for providing oceanographic products and services to all elements of the Department of Defense.