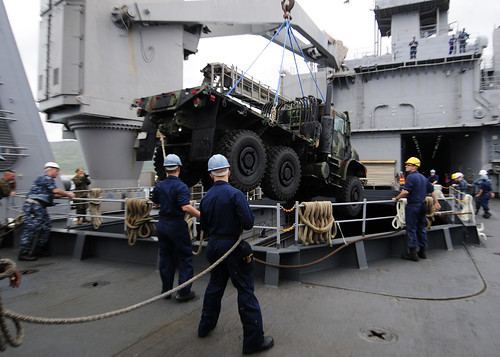 Tortuga and the embarked Marines will transit to Thailand and act as an afloat force staging platform to provide support and ease the suffering of the Thai people if requested.

"I think this is a great opportunity to showcase the U.S. Navy's capabilities, but more importantly it is a chance to help our regional neighbors," said Cmdr. Adrian D. Ragland, Tortuga commanding officer. "It's an honor to be able to support our allies in their time of need."

Thailand is currently experiencing the worst flooding in many years, receiving precipitation 40 percent above average over the last two months. More than 500 people have already perished since the monsoon season began in late July.

A humanitarian assistance survey team composed of U.S. Marines from III Marine Expeditionary Force conducted assessments between Oct. 15 and Nov. 4, 2011, to determine how the U.S. military may be able to provide additional assistance and support the effort of the Royal Thai government and military.

"We are part of the forward-deployed 3rd Marine Logistics Group here in Okinawa, and we strive to be prepared to meet today's crisis with today's force," said Col. Clarke D. Henderson, commanding officer, Combat Logistics Regiment 3. "We put this element together, embarked Tortuga, and got underway in less than a week to ensure that we can offer assistance as soon as possible."

"We needed a quick turn around for this onload," said Chief Warrant Officer Steve Metham, Tortuga's boatswain. "We concentrated, ensured that everyone was being safe, and got a lot of equipment and personnel on board in a very short amount of time."

Other CLR 3 assets include a medical detachment, a command and control element, and a transportation platoon.

Tortuga also received two CH-46E Sea Knight helicopters assigned to Marine Medium Helicopter Squadron 262 that will remain on board for the remainder of the mission.

"My first impression of Tortuga was very positive," said Henderson. "The ship's leadership set a focused, supportive tone and the CLR is fortunate to have a ship of this caliber to operate from."

The U.S. military has a long-standing partnership with the Thailand and will rely on experience gained from previous joint training exercises to efficiently render assistance.

"During operations like Cobra Gold we work to overcome coordination barriers and strengthen our relationship with Thailand so that we can respond quickly to situations like this one," said Ragland. "We are in a position to help people, and our Sailors take pride in the fact that we are a prepared, capable platform."

The U.S. Pacific Command continues to monitor the flooding in Thailand and is working closely with the U.S. Embassy in Bangkok, USAID, and the Office of Foreign Disaster Assistance to determine if and how it can best support the Government of Thailand and its people.