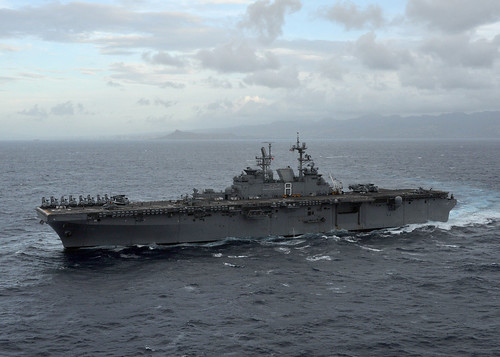 The Hawaii port visit is the first stop for the Makin Island ARG, which departed its homeport of San Diego, Nov. 14, for a regularly scheduled deployment in support of the Navy's Maritime Strategy.

While in the "Aloha State," Sailors and Marines from the Makin Island ARG will have the opportunity to observe Hawaiian culture, and take part in a variety of recreational and cultural awareness programs.

"Hawaii is always a favorite port call for Sailors and Marines during deployment," said Capt. Humberto L. Quintanilla II, PHIBRON 5 commander. "We enjoy bringing young Sailors and Marines to historic places such as Pearl Harbor, and we are always welcomed by the warm hospitality of the wonderful people here."

"Pearl Harbor is the perfect first port visit of deployment for this ship as this port served as the start of the voyage for the Marines of the Second Raider Battalion enroute to Makin Atoll," said Capt. Jim Landers, Makin Island's commanding officer. "With the rich World War II naval history associated with both our ship's name and Pearl Harbor, we know our Sailors and Marines will be visiting many of the historic sites in the area."

Makin Island is the first U.S. Navy ship to deploy using a hybrid-electric propulsion system. By using this unique propulsion system, the Navy expects to see fuel savings of more than $250 million over the course of the ship's lifecycle, proving the Navy's commitment to energy awareness and conservation.

The mission of the Makin Island ARG is to help provide deterrence, promote peace and security, preserve freedom of the seas and provide humanitarian/disaster response as well as supporting the Navy's Maritime Strategy when forward deployed.