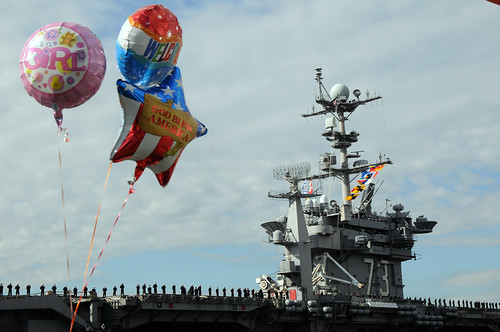 The patrol consisted of four port visits and two major exercises while cruising more than 50,000 nautical miles across the western Pacific Ocean.

"The crew's performance throughout the entire calendar year of 2011 has been nothing short of phenomenal," said Capt. David A. Lausman, George Washington's commanding officer. "From the very beginning, the crew demonstrated teamwork in preparing the ship to get underway early to help the relief efforts of Operation Tomodachi, a truly phenomenal feat. That dedication and professionalism continued throughout the entire cruise."

In July, George Washington participated in Talisman Sabre, an exercise to train and validate the U.S. and Australian joint task force in crisis planning and their ability to conduct contingency operations. Three months later, George Washington then teamed up with Japan for Annual Exercise 2011 which allowed the two nations to practice and evaluate coordination procedures and interoperability elements required to effectively and mutually respond to the defense of Japan, a regional crisis or contingency situation in the Asia-Pacific region.

"Over the past 51 years, the United States has forged a relationship with these nations built on a shared vision of peace, prosperity and regional stability. These exercises help us achieve that goal," said Lausman. "The reason we are able to successfully do this year after year is a testament to the strong relationship and mutual goals we share."

George Washington also conducted operations with Singapore, Indonesia, the Kingdom of Thailand and the Republic of Korea.

Designed for the launch and recovery of aircraft at sea, that's exactly what George Washington did over and over again for more than 150 days at sea. Teaming up with Carrier Air Wing (CVW) 5, George Washington's Air department successfully launched 6,220 aircraft while trapping a total of 6,269 planes; those aircraft going through 12.6 million gallons of JP5 which George Washington took on during two dozen replenishments-at-sea.

During their time off, the crew sent 882,446 emails per day totaling 132,366,900 for the entire cruise. For families and friends back home that sent letters and care packages, the crew received 158,000 pounds of mail in 2011. Additionally, the crew exceeded its goal for the Combined Federal Campaign by raising $136,000 to support eligible non-profit organizations that provide health and human service benefits throughout the world.

The crew of the U.S. Navy's only fulltime forward deployed aircraft carrier had the opportunity to make several unique port visits during the 2011 patrol spending a total of 17 days on liberty; the crew's first time ashore mostly likely their favorite as it came after spending 67 days underway. In August, the ship pulled into Laem Chabang, Thailand which was then followed by port visits to Busan, South Korea, Singapore and Hong Kong which last welcomed George Washington in 2009.

"The strength and reputation of this ship... is the crew. They are most professional, most energetic and most willing to learn; they are what I am most proud of," said Lausman.

"Coming back to Japan is almost like another port visit for me since I arrived here only a day before we began the cruise. I haven't gotten to experience much of my new home at all so I'm really excited to see it and get a chance to relax away from the ship." said Seaman Saul McGuire of Point Pleasant, W.Va.

"After all this time with flight operations, distinguished visitor embarks and port calls, there's no better feeling than seeing the kids and kissing the wife on our homecoming day," said Ensign Morris Hampton from Charleston, S.C. "That's our reward, a fitting way to say job well done."

George Washington's mission is to enhance security, stability and prosperity in the western Pacific Ocean and to be in position to work with friends and allies in the region and respond to any crisis across the operational spectrum as directed.