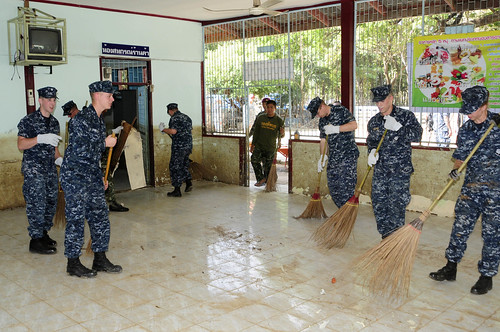 Since arriving on the 16th, Sailors have been providing assistance to victims of flooding that began in late July, claimed hundreds of lives and left many without food, water and basic supplies.

Twenty Sailors from Lassen combined forces with personnel from the U.S. Marines, U.S. Army, U.S. Air Force and the Royal Thai Army to help rehabilitate the school. The school suffered heavy water damage inside and on the surrounding compound. Flood water still surrounded the entire town as the team approached their destination.

During the day, the team helped students and faculty members of the school remove water damaged furniture and equipment from the school’s cafeteria. The floors and walls were then scrubbed down, as the team worked to remove stains and watermarks. The grounds of the school were also raked free of debris and major obstacles such as fallen trees.

Although they had participated in other community service projects supporting the flood victims, for many of the Sailors, this was their first time seeing the full extent of flooding damage left on the community. “We saw water up to four feet in some areas,” said Lt. Nicholas Fleming.

Many Sailors said they were encouraged by the results of their hard work after the event. Hospital Corpsman 3rd Class Sebastian Kayser said it was a great feeling knowing they did something positive for people who needed help.

“It was definitely one of the most satisfying things I’ve done since I’ve been in the Navy,” he said. “I felt like I really made a difference in someone’s life.”

Lassen Sailors continue their relief efforts and building upon the positive relationship between the U.S. and Thailand.

Lassen is assigned to Destroyer Squadron Fifteen (DESRON 15) and is currently assisting in disaster relief efforts in Thailand.