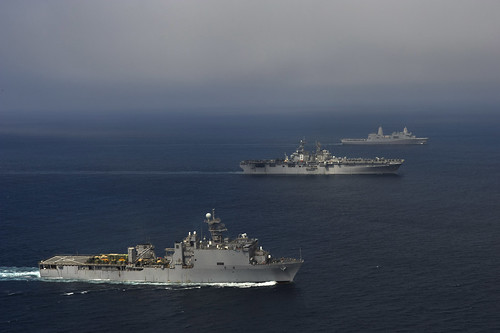 Quintanilla said the months of training conducted by the different components of the Makin Island ARG, as well as the ARG-MEU certification exercises, have forged a well-trained three-ship amphibious ready group for a variety of littoral operations.

"The Makin Island ARG is a highly capable group of Sailors and Marines poised to execute various types of combat or disaster relief missions in various regions of the globe," said Quintanilla. "From providing humanitarian assistance during a natural disaster, to ensuring the free flow of commerce, the Makin Island ARG is proof of America's commitment to peace and stability wherever we are needed."

This is the maiden deployment for Makin Island, the Navy's newest amphibious assault ship and the only U.S. Navy ship with a hybrid electric propulsion system.

By using this unique propulsion system, the Navy expects to see fuel savings of more than $250 million during the ship's lifecycle, proving the Navy's commitment to energy awareness and conservation.

The 7th Fleet AOR includes more than 52 million square miles of the Pacific and Indian oceans, stretching from the international date line to the east coast of Africa, and from the Kuril Islands in the north to the Antarctic in the south.