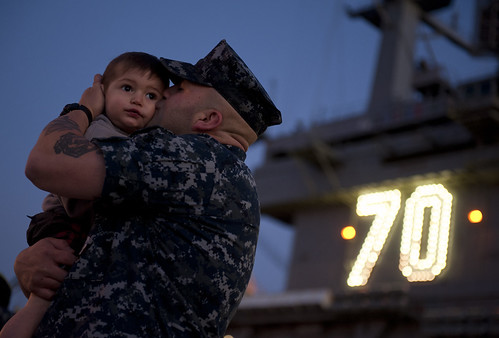 Guided-missile cruiser USS Bunker Hill (CG 52) and guided-missile destroyer USS Halsey (DDG 97) deployed with Vinson as part of Carrier Strike Group (CSG) 1, along with the embarked CVW 17 that includes the "Fighting Redcocks" of Strike Fighter Squadron (VFA) 22, the "Sunliners" of VFA 81, the "Stingers" of VFA 113, the "First of the Fleet" of VFA 25, the "Garudas" of Electronic Attack Squadron 134, the "Tigertails" of Carrier Airborne Early Warning Squadron 125 and the "Red Lions" of Helicopter Anti-Submarine Squadron 15.

The Carl Vinson CSG will help provide deterrence, promote peace and security, preserve freedom of the sea and humanitarian/disaster response within U.S. 3rd Fleet's 50-million square mile area of responsibility in the eastern Pacific, as well as supporting the nation's maritime strategy when forward deployed.