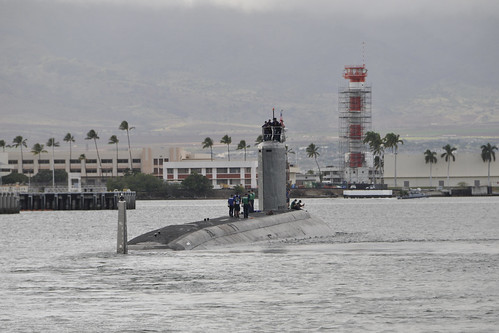 PEARL HARBOR - Friends and families of the crew from the USS North Carolina (SSN 777) gathered at the submarine piers on board Joint Base Pearl Harbor-Hickam to say goodbye as the Virginia-class submarine departed for a scheduled Western Pacific deployment Dec. 1.

"We have gone through an intense pre-deployment preparation period allowing us to deploy with some of the finest trained Sailors our nation has ever put to sea on board one of the most technologically advanced platforms," said Cmdr. Richard Rhinehart, USS North Carolina Commanding Officer. "We are truly privileged to sail the North Carolina on behalf of our country."

This is North Carolina's maiden Western Pacific deployment since changing homeports to Pearl Harbor in November 2010, and the crew morale is that of excitement and pride. The ship has several new crewmembers that will participate in their first deployment.

"The crew is excited to be part of North Carolina's first deployment. The hard work getting her to this point is now paying off as these submariners are now heading west on her maiden deployment," said Rhinehart. "The North Carolina is an amazing submarine crewed by a talented group of Sailors. I am proud of every one of them and what they have accomplished."

Sonar Technician Submarine Seaman Apprentice Nathan Hufford, who reported in Nov. 2010, describes his feelings about his first deployment as "anxious and ready to go."

"I have been looking forward to getting underway on my first deployment ever since I checked on board," said Hufford. "I am very eager to finally execute my submarine training and gain the experience of a deployment. I am also excited about being part of North Carolina's first deployment, visiting foreign ports and seeing the world."

North Carolina's keel was laid on May 22, 2004, and the submarine's official commissioning ceremony was held on May 3, 2008. Measuring 377 feet long, weighing 7,800 tons when submerged and with a complement of more than 130 crewmembers, it is the fifth ship to be named in honor of the Tar Heel State. This state-of-the-art submarine is capable of supporting a multitude of missions including anti-submarine warfare, anti-surface ship warfare, strike, special operations, intelligence, surveillance, and reconnaissance, irregular warfare and strike group operations.

North Carolina is the third Virginia-class submarine home ported at Pearl Harbor, and is assigned to Commander, Submarine Squadron 3.