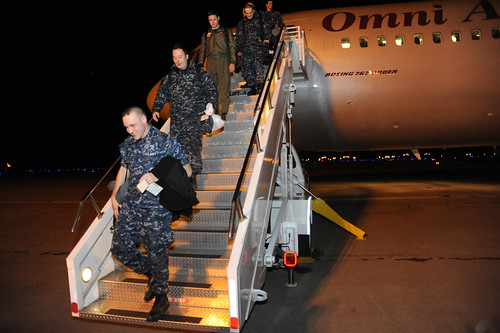 MISAWA, Japan - The "Screaming Eagles" of Patrol Squadron (VP) 1 have landed, Dec. 1, 2011, and have commenced a six-month deployment to this northern-Japan located U.S. naval installation.

VP-1 is the first P-3 Orion squadron to deploy here since 2007. Their arrival heralds a return to normal operations for both Naval Air Facility Misawa (NAFM) and the P-3 community.

Diminishing tasking in support of Operations Enduring and Iraqi Freedom, along with more planes returning to a flying status after a "Red Stripe" overhaul, has increased the number of assets available to deploy to 7th Fleet Area of Responsibility (AOR).

VP-1 now arrives with approximately 200 Sailors who will call Misawa home during their deployment here.

"My Sailors and I have been looking forward to this deployment," said VP-1 Commanding Officer Cmdr. Gregory Sleppy. "I'm excited for the opportunity that we have to expand Maritime Patrol and Reconnaissance in the 7th Fleet AOR."

Sleppy said the top-notch service provided at NAFM makes it an ideal location to deploy.

"The support that we've been receiving so far from Naval Air Facility Misawa, the 35th Fighter Wing, and Commander Patrol and Reconnaissance Force 72 has been superb," said Sleppy. "They are fantastic hosts and I think they will help us overcome any challenges we may face during our time here."

As snow continues to fall throughout the day, one of those challenges will be to conduct normal operations under Misawa's harsh winter conditions. But VP-1's Command Master Chief Jesse A. Robles said his Sailors are motivated and ready to fly.

"My Sailors are looking forward to tackling the task at hand," said Robles. "There will always be challenges during a deployment, but so far everything is coming along well." NAFM is an associate command of Misawa Air Base and is tasked with providing aviation and ground logistic support and services to all permanent and transient Navy and Marine Corps forces in Northern Japan.