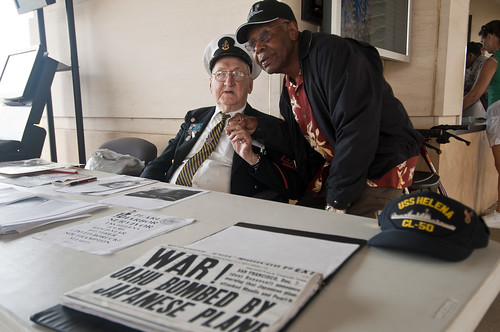 The event grouped together leading historians and eye witnesses to give account to the tragic events that occurred on Dec. 7, 1941.

"It is a sentimental journey every time I come here," said Borucki. "I remember I lost 33 shipmates. We had to carry out the dead. Bombs and machine guns were going off and there was yelling and screaming and I saw Soldiers and Sailors in the oil filled waters."

Peter Borucki, Edward's 7th son, expressed his feelings toward coming to the symposium every year with his father.

"It's like a pilgrimage to come here," Peter said. "I am very grateful that my father, at 91 years old, is in good health and can still come out here every year."

"To listen to the other veterans and to hear their stories – for those that can even actually talk about it – it's so moving and it's an experience that I am so grateful that I am able to take advantage of," said Peter. "There are so many other people I wish could come out here and see exactly where this happened and how important it is to remember it."

Allen Bodenlos, retired Army Sgt. and survivor of the 1941 attack, described an experience he had while at a previous symposium.

"A little Japanese lady came up to me with tears streaming down her face," said Bodenlos. "She said 'Sir, may I hug you,' and as we hugged very tightly for a moment, she whispered, 'Sir, I am so sorry. Can you ever forgive my country?'"

Bodenlos replied, "Dear lady, I have forgiven your country many years ago, and now we are friends."