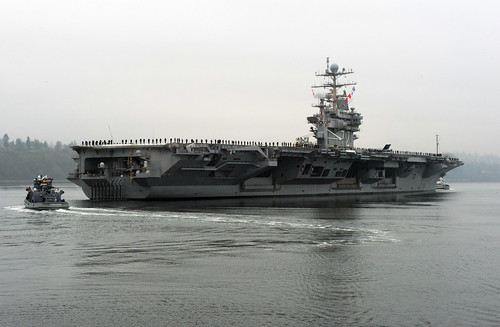 The deployment will be to the western Pacific Command and Central Command areas of responsibility, culminating in Lincoln's eventual change of homeport to Newport News, Va.

Lincoln Carrier Strike Group will focus on maritime security operations and theater security cooperation efforts while deployed, both of which help establish conditions for regional stability.

"Our Navy's ability to be globally deployed provides a significant contribution to maritime security. Lincoln Strike Group is ready to respond across the globe in support of our nation's global interests and as a force for peace and stability," said Rear Adm. Mike Shoemaker, commander, Lincoln Carrier Strike Group.

"We have only had one underway period as a full strike group since returning from our last deployment in March," said Shoemaker. "But the team performed exceptionally well in all warfare areas and we are ready to go. We also had the opportunity to support a spirited LA Navy Week, conduct bilateral US-Japanese operations along with our Composite Unit Training Exercise certification, and operate along with USS Carl Vinson (CVN 70) during her pre-deployment preparations. The Chief of Naval Operations, Commander, U.S. 3rd Fleet and Master Chief Petty Officer of the Navy, along with many other dignitaries, visited Lincoln while we were in Los Angeles or underway for training."

The deployment is part of an ongoing rotation of forward-deployed naval forces that support maritime security operations, fleet commander engagements and exercises with other coalition maritime forces in international waters around the globe.

"The crew of this ship is excited, prepared and determined to make a difference in the world. They execute their jobs with dedication and commitment every day," said Capt. John D. Alexander, Lincoln's commanding officer.

"Abraham Lincoln will forever be tied to Everett and the Pacific Northwest," Alexander said. "The city has been home for the ship and our families for some 15 years. We cannot begin to express our appreciation for the support this community has provided."

The Navy announced in December 2010 USS Nimitz (CVN 68) will replace Lincoln in Everett upon completion of a docking planned incremental availability (DPIA) maintenance at Bremerton, Wash. Lincoln has been homeported at Naval Station Everett since January 1997.

"I wish to thank all the people of Washington and the Everett area for their enormous efforts on our behalf throughout the years," Alexander said. "They are all great Americans and are to be congratulated on their undying contributions to the Navy."

For more information about CSG 9 and USS Abraham Lincoln, visit http://www.navy.mil/local/cvn72/ or www.facebook.com/usslincoln.