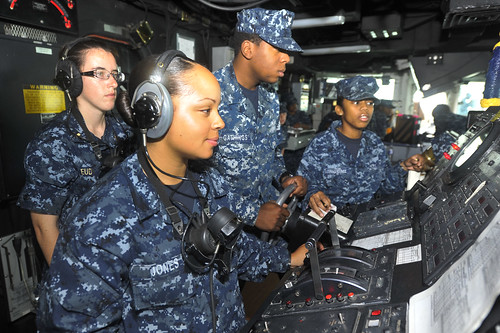 While in the "Lion City," Sailors and Marines from the Makin Island ARG had an opportunity to observe the local culture, take part in a variety of Morale, Welfare and Recreation sponsored tours, and use the time in port to make telephone calls to friends and family for Christmas.

Most Sailors and Marines on liberty celebrated their holiday in Singapore with shopping, seeing movies, dining at local restaurants and sightseeing.

Sailors and Marines also took part in community service projects around Singapore during the port visit. Many of these projects involved bringing Christmas gifts to needy children in the area.

"Most of the community service projects I've done involve a lot of maintenance and upkeep," said Chief Warrant Officer Marc Lefebvre, a Makin Island Sailor who dressed as Santa Claus and handed out presents at a local children's center. "The unique thing about this one was that you got to see the reaction of what it meant to the people you were helping, and I think the kids really enjoyed it."

Capt. Humberto L. Quintanilla II, PHIBRON 5 commander, said that Singapore remains one of the great port calls for Sailors and Marines, and being there for the Christmas holidays made the visit exceptionally memorable.

"Singapore is still the crossroads of international maritime trade," said Quintanilla. "The unique blend of Asian cultures and business interests from around the world always makes it a very engaging port visit for young Sailors and Marines. This is the city-state they vaunt to family and friends as being a once-in-a-lifetime experience."

The Makin Island ARG deployed Nov. 14 in support of the nation's maritime strategy and has been conducting theater security cooperation missions in the U.S. 7th Fleet area of responsibility (AOR).

The mission of the Makin Island ARG is to help provide deterrence, promote peace and security, preserve freedom of the seas and provide humanitarian/disaster response as well as supporting the Navy's maritime strategy when forward deployed.

The 7th Fleet AOR includes more than 52 million square miles of the Pacific and Indian oceans, stretching from the international date line to the east coast of Africa, and from the Kuril Islands in the north to the Antarctic in the south.