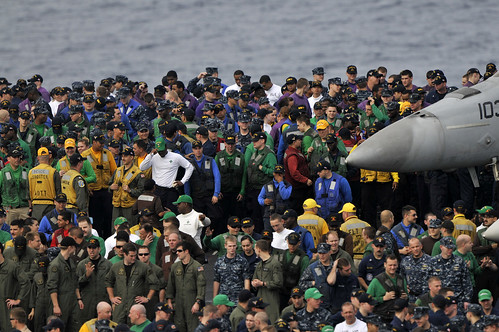 The aircraft carrier USS Carl Vinson (CVN 70) is deployed with guided-missile cruiser USS Bunker Hill (CG 52) and guided-missile destroyer USS Halsey (DDG 97). Embarked aboard Vinson is Destroyer Squadron 1 and Carrier Air Wing (CVW) 17, which include the "Fighting Redcocks" of Strike Fighter Squadron (VFA) 22, the "Sunliners" of VFA 81, the "Stingers" of VFA 113, the "First of the Fleet" of (VFA) 25, the "Garudas" of Electronic Attack Squadron 134, the "Tigertails" of Carrier Airborne Early Warning Squadron 125 and the "Red Lions" of Helicopter Anti-Submarine Squadron 15.

Carl Vinson and embarked CVW 17 departed its homeport of Naval Air Station North Island, Calif., Nov. 30, for a deployment to the U.S. 5th and 7th Fleet areas of responsibility. CSG 1 departed Hong Kong Dec. 30, after a three-day port visit, prior to transiting to U.S. 5th Fleet.