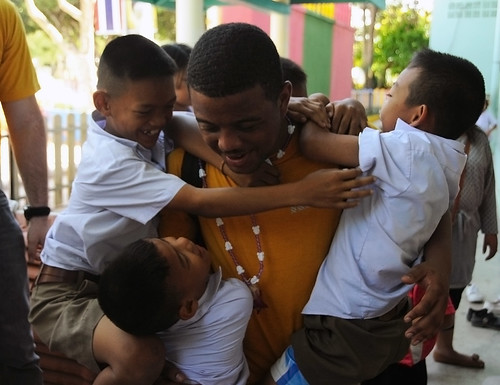 While in Thailand, Sailors from the two ships visited with the people of Thailand, experienced the local culture and participated in a series of community service projects (COMSERVs) to further strengthen the relationship between the two countries.

Sailors painted schools, cleaned local temples and visited with children at schools and medical facilities as part of the COMSERVs.

The Lincoln Chiefs Mess visited with HIV/AIDS-stricken children and adults at the Camillian Relief Center in Rayong. Chief Religious Program Specialist Elliot Warley said spending time with the children was the most worthwhile part of his time in Thailand.

"Even though these kids are sick, they're still kids," Warley said. "We interacted with them, we played with them, and we gave them toys. It was a really good experience."

Other highlights from the port visit included tours of temples and historic sites, elephant rides, jungle adventure tours and visits to the Sriracha Tiger Zoo.

Lincoln, the flagship of Carrier Strike Group (CSG) 9, is in the 7th Fleet area of responsibility (AOR) as part of a deployment to the western Pacific and Indian Oceans en route to support coalition efforts in the 5th Fleet AOR. The visit to Thailand was the first port call of Lincoln's 2011-2012 deployment.