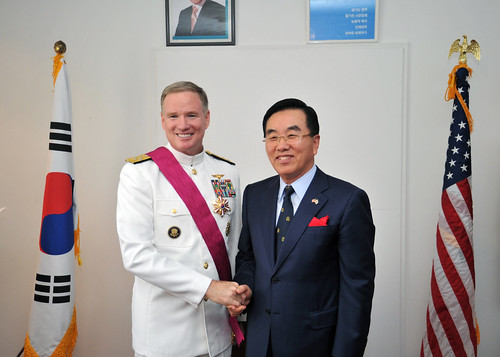 Walsh was presented the award by Young-kil Suh, Republic of Korea (ROK) consul general in Honolulu, for the U.S. Pacific Fleet’s support following the sinking of ROKS Cheonan (PCC-772) and the shelling of Yeonpyeong Island in 2010.

Suh also cited Walsh’s “34 years of selfless service and distinguished leadership” and expressed his “sincere appreciation for (Walsh’s) tireless work and contributions to maintaining peace and stability in the Asia-Pacific region including Korean interests.”

The admiral, who this week is ending his nearly two-and-a-half years as Pacific Fleet commander, expressed his appreciation for the special recognition. “To have the confidence of the Korean government, to have such a medal is quite extraordinary. It makes me really proud of the work we have accomplished at Pacific Fleet.”

Walsh also reminded those at the consulate that events on the peninsula illustrate how we must remain ready to protect our assets on a moment's notice.

“In June 1950 we learned how quickly things can change, and in March 2010 we were reminded again of how quickly things can change,” Walsh said. “We had a relationship (with the Republic of Korea navy) that grew in terms of strength and capacity brought on by the sinking of the Cheonan in the spring of 2010. We worked with them closely in terms of training and identifying the needs of their current navy and their future navy.”

Suh also noted that the award cited Walsh for increasing strong bonds between the U.S. Navy and the Republic of Korea navy.

“I firmly believe the Korean and U.S. alliance has been strong since the Korean War,” Suh said. “And it will be even stronger through continuous cooperation and collaboration like the one Adm. Walsh has shown.”