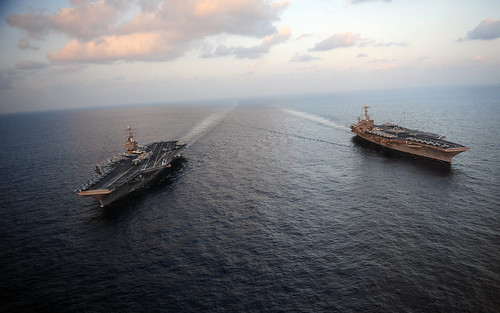 While operating in the seas surrounding the Arabian Peninsula, JCSSG played a pivotal role in the drawdown of U.S. forces in Iraq and provided aviation support to coalition ground troops in Afghanistan.

"Flying the last Navy air mission in Iraq was a historic achievement for all of us," said Capt. Dale Horan, commander of Carrier Air Wing (CVW) 9 embarked aboard Stennis, the flag ship of the strike group.

"Everyone in this strike group played a part in making that happen and it's a part of history we will always share," Horan said.

In January, after transitioning from OND to supporting operations in Afghanistan, JCSSG forces thwarted an attempted pirate attack on a Bahamian-flagged cargo vessel, then freed a group of Iranian mariners held captive by the same crew of suspected pirates.

"This was a well-executed display of the mutli-mission capability of the carrier strike group and a testament to the professionalism of our Sailors," said Stennis' Command Master Chief Stanley Jewett.

In 7th Fleet, the strike group plans to conduct several readiness exercises with partner countries in the region as well as visits to Singapore and the Philippines before preparing to head back to the United States.

"The manner in which we've conducted ourselves and executed our mission is indicative of the character of our Sailors and the spirit of our country," said JCSSG commander, Rear Adm. Craig Faller. "While we have much to accomplish before returning home, and I'm confident that we will finish our deployment with the same level of professionalism and personal conduct we've displayed throughout."

The 7th Fleet's area of responsibility encompasses more than 48 million square miles -- from the Kuril Islands in the north to the Antarctic in the south, and from the International Date Line to the 68th meridian east, which runs down from the India-Pakistan border.