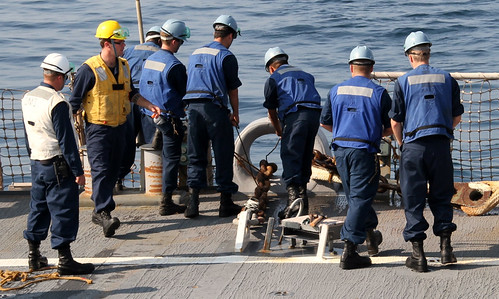 He was the only Sailor below the rank of Chief Petty Officer selected for a Surface navy Association leadership award this year. The award is presented to two active-duty Navy members who best exemplify the qualities of Admiral Zumwalt including dynamic leadership, operational excellence, unselfish dedication to duty, visionary zeal and exemplary care.

The winners are selected by a panel of active-duty and retired individuals chosen by the SNA Executive Committee. Newton qualified for the award by receiving a nomination from a subordinate which was submitted with a positive command endorsement.

Newton joined the Navy in 2007 hailing from Chicago, where he was born and raised. USS Curtis Wilbur is his first duty station. There he has served as workcenter supervisor and leading petty officer.

"Newton provides a tremendous amount of dedication to the ship," said Cmdr. Christopher Monroe, commanding officer of Curtis Wilbur. "We faced tough manning issues which he overcame and stepped up as the leader for deck division."

On January 12th, 2012, Jim Zumwalt, son of Admiral Zumwalt, presented the award to Newton at the Surface Navy Association's 24th National Symposium in Washington, DC. With his first visit to the capital, the Surface Navy Association provided him the opportunity to see Arlington National Cemetery, Capitol Hill, and several other sites and memorials. Newton was joined by his mother who attended the entire event with him.

"It was great seeing the capital and spending time with my mom," said Newton. "The Surface Navy Association offered us so much to see while we were visiting and welcomed us warmly at each reception."