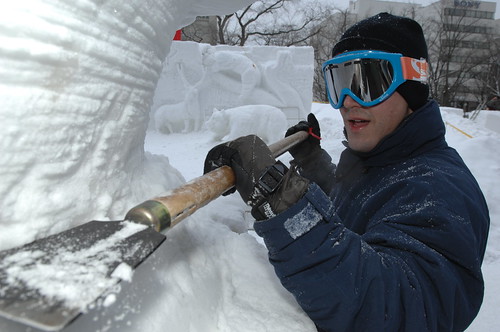 Known as the "Sapporo Six," the team comprised Sailors assigned to NAF Misawa or its tenant and deployed commands currently stationed there. Together, the six Sailors will attempt to create a snow sculpture bust of the Navy's famous "Lone Sailor" statue that is located at the U.S. Navy Memorial in Washington D.C.

The Sailors traveled from Misawa to Sapporo to take part in the city's annual wintertime festival and to represent the U.S. naval installation, which is based out of northern Japan. While their first day in Sapporo was dedicated to meeting with city and military officials, today began the arduous task of creating a sculpture out of a six-foot-by-six-foot block of compressed snow.

"We started out this morning by basically laying out a grid on all four sides of our snow block," said Chief Builder Christopher "Billy" Knox, the Navy Misawa Snow Sculpting Team leader, and native of Chapin, Ill. "Once we finished we drew in the exact specifications of the design to include the head and shoulders of 'The Lone Sailor.'"

While the first few hours were dedicated to the tedium of measuring and drawing the team's proposed design, the afternoon was filled with the sounds of scraping and chiseling as the team began sculpting.

Utilizing dozens of tools, ranging from a trowel to a cheese grater, the team's project slowly took form.

"Today we're only concerned about getting the outline completed," said Electronics Technician 2nd Class James Johnston, originally from Kaneohe, Hawaii. "We'll worry about the details later, but for now, we're just carving the general structure out."

The team has until Feb. 5, to complete their sculpture; the festival begins the following day and runs throughout the entire week.

While the deadline to complete such an ambitious design may be cause for concern, it's the famous Sapporo weather that seems to be the primary difficulty the team will need to overcome.

"I'm wearing three pairs of socks and I still can't feel my toes," said Information Systems Technician 3rd Class Zachary James, a Seattle native who, along with his teammates, persevered weather that never topped 20-degrees Fahrenheit. "You have to deal with the weather and the general fatigue associated with this kind of work, but we're having a great time building this thing and having a lot of fun doing it."

Despite the difficulties associated with creating such an ambitious design, Knox said he couldn't be happier with his team's efforts so far.

"The guys are putting out 110-percent effort here, and their attitudes and work ethic has been outstanding," he said. "Which is good, because as far as we're concerned, failure is not an option.

This year marks the 29th year that Navy Misawa has sent a delegation to Sapporo to participate in the Snow Festival.