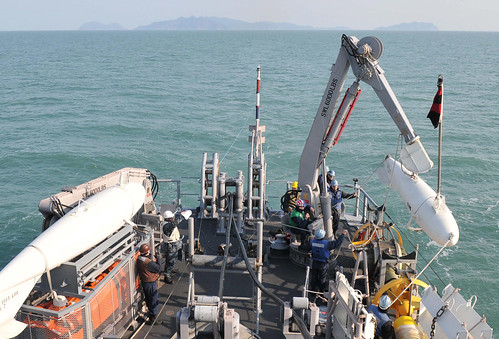 FE is a series of training events that are defense oriented, annual and designed to increase readiness to defend the Republic of Korea (ROK), protect the region and maintain stability on the Korean peninsula. The exercise enhances the combat readiness posture of the ROK-U.S. alliance through combined joint training.

"Participating in FE gives the Patriot team the opportunity to plan and execute complex mine countermeasure training scenarios with our ROK allies," said Lt. Cmdr. Suzanne Schang, commanding officer of Patriot. "My crew and I are honored to be operating side by side with our ROK partners, combining our naval capabilities, while safely and effectively training for our primary mission of mine warfare."

Patriot visited in the port city of Chinhae, ROK March 9-12. While in port, Patriot and ROK Navy Sailors participated in a softball match, ship tours and conducted military-to-military engagements including the liaison exchange of a ROK and Patriot Sailor, both who are currently embarked on board their counterparts ship participating in the exercise.

Patriot Sailors said they are looking forward to the challenge and experience of FE and the chance to operate with the ROK Navy.

"After all of the training we have conducted which has led us up to this point, I feel confident that we will be able to do our part in FE," said Mineman 3rd Class Sean McDermott. "It will be good for the younger guys on board to put their training into practice and allow those who have participated in prior exercises the chance to further enhance their skills."

"It feels good to be able to utilize all of our minesweeping equipment and demonstrate our talents during this exercise," said Mineman 2nd Class Justin Hanson. "I think FE is going to a great experience for the entire crew."