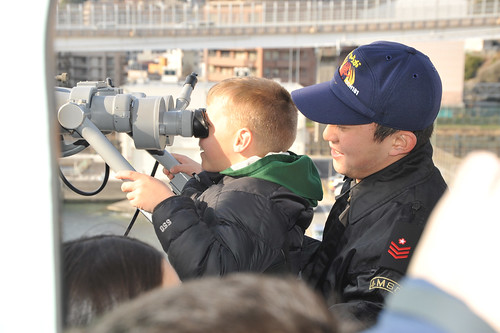 Twenty-three chiefs and family members from the U.S. Navy's only full-time, forward-deployed aircraft carrier boarded the 646-foot Japanese flagship at its homeport in Yokosuka and enjoyed an extensive tour of the ship including its bridge, flight deck, primary flight control, and hangar bay, in addition to many other ship spaces. After the families of the 360 Japanese crew boarded, all hands enjoyed a three-hour underway through Tokyo Bay from Yokosuka to Yokohama. While underway, participants enjoyed an aerial demonstration by one of Hyuga's anti-submarine warfare helicopters. Hyuga and George Washington have been sister ships since Hyuga was commissioned in March 2009.

"It's awesome," said Arisa Helbick, daughter of George Washington's Chief Machinist's Mate Ryan Helbick. "I get to see all the equipment, views from the bridge and stuff. It's different than the George Washington, so it's very interesting because I've never actually been to both ships and, it's like, cool."

It may have been Arisa's first time on both ships, but not so for Hyuga's Command Master Chief Motonari Suzuki and his family. Late last year, they were invited to participate in George Washington's Family Day Cruise. It's all a part of the ever-increasing interchange between the navies' senior enlisted leadership.

"We constantly work together to promote an exchange of ideas and good camaraderie," said George Washington's Command Master Chief Martin King. King has served many years in Japan spread out over seven different commands.

"We've always had an extremely close relationship and it gets closer every day," said King. "Today's event is just another great way to show the friendship between our two navies."

It's a friendship that's both professional and personal. Chief Intelligence Specialist Andy Shropshire, the Bilateral Relations Leading Chief Petty Officer at Commander, Naval Forces Japan, was also one of the guests on the Hyuga's Family Day Cruise but his attendance had nothing to do with his title; his wife Shannon is a Senior Chief Intelligence Specialist aboard George Washington and Andy was her guest.

"This is just really cool," said Andy Shropshire. "While this is right up my alley in regards to my job, the family is just having a ball experiencing this." It's a notion his young son Ethan echoed.

"Awesome. I like it. It's a good experience," said Ethan. "I like touching stuff so I loved touching the bridge, the wheel and stuff. I liked turning the ship's wheel."

Whether it was seeing the Hyuga from an experienced Sailor's perspective or that of a family member, the experience highlighted how the two countries shared ideals.

"You come to find out that their jobs are the same as what we do every day. They have the same problems that we do. We exchange ideas and see what works for us and pass it on," said Navy Career Counselor Master Chief Oscar Feaster. Feaster has participated extensively in these exchanges while stationed aboard George Washington, and as he approaches his retirement after 30 years in the U.S. Navy in May, he cherished what was likely his last underway of a long career. "We're a pretty close knit group here with the master chiefs, so it's been a lot of fun."

"It's a very, very important alliance," said Hyuga's Command Master Chief Motonari Suzuki. "It's very important to have the face-to-face communication with other chiefs, so exchanges like these are critical. They're also very enjoyable."

One of the U.S. chiefs group's escorts, JMSDF Chief Koki Kumagi, has been a part of the U.S.-Japan Sister Ship program for more than 20 years. He said through a translator that the U.S-Japan relationship has strengthened over the years, and was shown to be especially strong after last year's earthquake.

"Over the years it's become a much closer relationship where we cooperate a lot more and we get to do more things like this," said George Washington Chief Machinist's Mate Ryan Helbick. "The experience makes me very proud to serve with them."

While Japanese and American Sailors interact professionally continuously due to operations and exercises, George Washington and Hyuga chiefs have also enjoyed celebrating holidays with both American and Japanese traditions such as mochi pounding, presentation of Christmas trees and New Year's kadomatsu, along with touring each others' ships in port and, now, underway. Both King and Suzuki say activities like these ensure a strong relationship, and they both are dedicated to ensuring the exchanges continue.