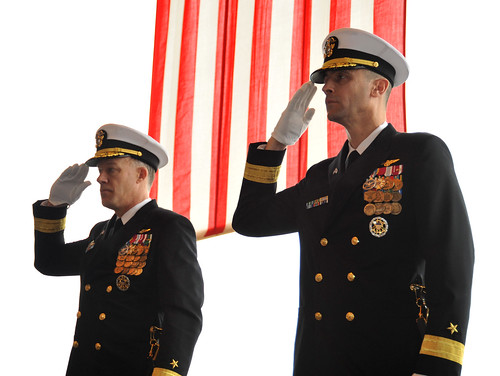 Leading the command, known as Task Force (CTF) 72 in the Pacific, Buck said that the success of his 19-month tour was attributable to the people with whom he served.

“When I look around today, so honored to have you all in one place where I can thank you, I realize that with a team this outstanding, the success of our commands was never in doubt,” said Buck. “You all made this tour what it was for me, by your tremendous leadership, your daily contributions, your unwavering support, your expert counsel, your candid advice, and your warm, genuine friendship.”

“Today, I leave you in the capable hands of Rear Admiral Matt Carter. Matt is as fine an officer as the U.S. Navy has to offer. He’s ready to take lead of this pack, and the pack is ready to support him, and I can’t wait to marvel at the things you’ll accomplish together,” said Buck.

Vice Adm. Scott H. Swift, commander, U.S. 7th Fleet, praised Buck for his outstanding leadership during the past year and presented him a Legion of Merit for his service.

“I can’t think of an operational plan, mission or joint task force in the Western Pacific that doesn’t include a P-3 as a critical element for its success,” said Swift. “Admiral Buck and his team have successfully met all mission requirements and more.” Swift said Buck and his team enabled the United States to project credible, persistent power all around the globe.

“From providing real-world surveillance to forces combating piracy to assisting vessels in distress, you’re first on the scene ensuring we have a clear understanding of the conditions and environment in which we are operating, saving lives and setting the stage for success of both 5th and 7th Fleet,” said Swift. “The combination of your leadership, the talent and dedication of your staff and crews that man your squadrons and fly your missions, has sent a clear, consistent and powerful message throughout the Pacific, Asia and Indo theater: ‘Task Force 72 is here, now, engaged and operating forward.’”

Buck was in command during one of the most significant natural disasters in recent world history, the Great Eastern Japan Earthquake of March 11, 2011 and ensuing tsunami. As the operational commander for patrol and reconnaissance aircraft in the region as well as all aviation support and maintenance, his commands were deeply involved in the Navy’s historic humanitarian assistance and disaster relief efforts, now referred to as Operation Tomodachi.

“We spent much of the year 2010 celebrating the 50th anniversary of the (U.S. – Japan) alliance, and we spent much of 2011 demonstrating its worth, following the catastrophic events of March 11,” said Buck. “Together, we learned to grow under crisis conditions and adapt, improvise and to fight the fear of the unknown – with a force that, together, could land on its feet within hours of a disaster and prove by its actions what it means to be a friend.”

In addition to thanking Buck for his leadership and the superb condition of the commands he was assuming, Carter had one primary message for his staff.

“Continue to take care of the warfighter, work closely with our allies, partners, and friends, be ready, do your best, and take care of our Sailors, Marines, civilians, and their families,” Carter said. “If we do those things, then everything else will fall into place.”

Buck’s next assignment will be as Commander, Patrol and Reconnaissance Group in Norfolk, Va.