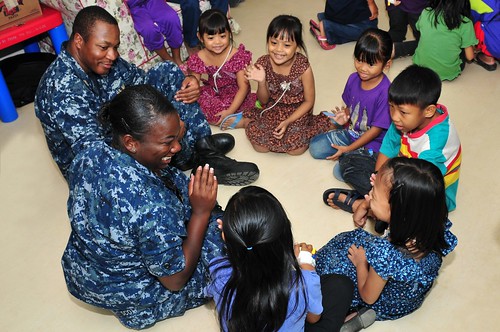 Likas Hospital is a facility for children under the age of 15 who require treatment and special needs. According to head nurse Matron Maureen Yunus, one of those needs includes blood transfusions for children who have a hemoglobin deficiency.

"When we told the children that U.S. Navy Sailors were coming to see them, they all became very excited," said Yunus. "I am grateful to all who participated and helped put smiles on all of the kids' faces."

Land's Religious Ministries Department worked together with the children's hospital to put the event together, and had no problems recruiting volunteers. Rather than spending their liberty time out in town, 14 Sailors from Land and Louisville volunteered to visit the children.

"This is Louisville's first port call this deployment," said chief sonar technician submarine (submarine service) Winfred Cameron. "There is no where else I'd rather be than here, seeing children's smiling faces."

The volunteers divided into two groups of 10. The first group went to the second floor of the building where children and parents awaited monthly blood transfusions. Sailors quickly got involved with the kids by playing games and coloring with them.

"The children enjoyed playing all of our silly games, singing kid songs and hanging out with the Sailors," said Lt. Aaron Roberton, Land's command chaplain. "This is a very challenging time for the kids and their parents, so I'm glad that we got to provide a distraction from all the medical treatment."

The second group of volunteers headed to the third floor to play with another group of children. Sailors had no troubles with the language barrier thanks to the universal quality of kindness and friendship.

"This was a very successful COMSERV," said Roberton. "Several of the children's parents came up to me and told me that seeing the kids play with the Sailors was a real special time. Everyone at the hospital was appreciative of our support and we hope to come back soon."

Land is in Malaysia conducting a coordinated tended mooring with Los Angele-class fast attack class submarine USS Louisville (SSN 724) as part of a theater security cooperation and good will mission in the region. Land is currently on an extended deployment to Guam serving as U.S. 7th Fleet's lead afloat fleet maintenance activity from the ship's permanent home port of Diego Garcia.