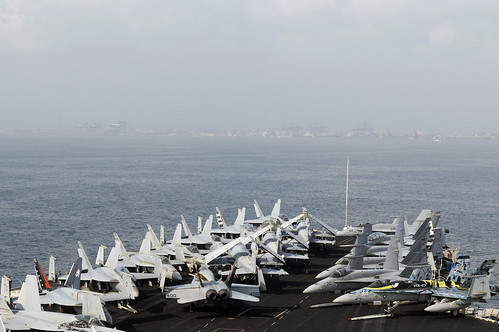 Exercise Malabar is a regularly scheduled bi-lateral naval exercise designed to advance the U.S.-Indian military coordination and ability to plan and execute tactical operations. The exercise series will encompass approximately 450 nautical miles of sea and air space in the Bay of Bengal.

The exercise will feature both ashore and at-sea training. During the port visit, CSG-1 personnel will attend various pre-sail seminars in Chennai covering topics ranging from air defense and integrated anti-submarine warfare operations to carrier aviation operations and counter-piracy operations.

Cmdr. Peter Yelle, the air operations officer and exercise coordinator for CSG-1, identified the numerous personnel exchanges between the U.S. and Indian ships as a benefit Exercise Malabar provides, and said they are conducive to its success.