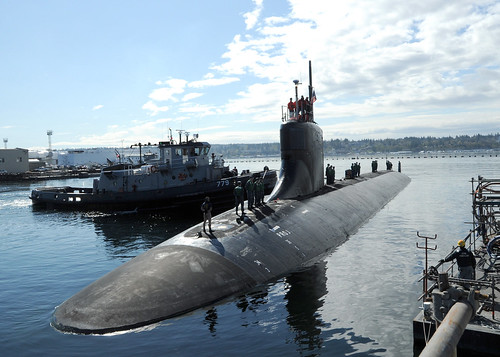 "It's great to be back - we all missed our families," said Cmdr. Ian Johnson, USS Connecticut commanding officer.

Family members cheered as Connecticut arrived at Pier Delta and moored just aft of its sister ship, USS Seawolf (SSN 21). The first Sailor off the boat was Hospital Corpsman 1st Class (SS) Miguel Codd, who was able to hold his two-month-old son for the first time ever.

"Words can't express how wonderful this is," said Codd. "When I got the news about my son, it was exciting...I can't describe how great I feel right now."

During her deployment, which began Nov. 30, 2011, Connecticut supported combatant commander requirements and missions in the Western Pacific. Connecticut also made port visits to Singapore and Yokosuka, Japan.

"The deployment was outstanding. It's a testament to the endurance of the Seawolf class, and the crew did a fantastic job," Johnson said. "Our presence in the Western Pacific does a lot to promote stability in the region, and it also gives us the opportunity to interact with the sailors of other nations."

During the deployment, Connecticut was recognized by Commander Submarine Force, U.S. Pacific Fleet; as the recipient of the 2011 Battle Efficiency Award, or Battle "E," for Submarine Development Squadron (SUBDEVRON) 5. The award was announced Jan. 1.

The Battle "E" is an award of merit presented to the most proficient submarine crew in each squadron and recognizes sustained superior technical performance and continual combat readiness throughout the year.

For now, Connecticut's Sailors are just happy to be back in the Pacific Northwest.

"It's good to be back home with my wife and daughter," said Torpedoman 2nd Class (SS) Tracey Cox. "It's time to do some work on remodeling the house, maybe take a vacation."

Connecticut is the second of the Navy's three Seawolf-class submarines, all of which are homeported in the Pacific Northwest - Connecticut and Seawolf at Bremerton, Wash., and USS Jimmy Carter (SSN 23) at Naval Base Kitsap-Bangor.