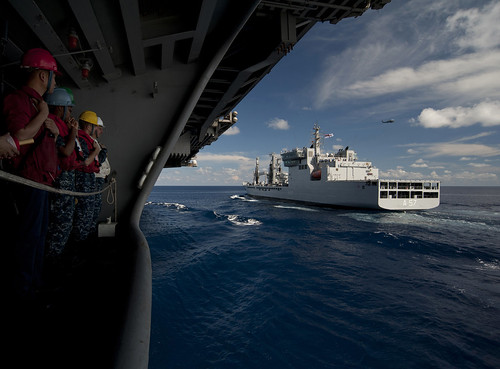 BAY OF BENGAL - Sailors aboard the Nimitz-class aircraft carrier USS Carl Vinson (CVN 70) conducted a refueling-at-sea (RAS) exercise with the Indian Navy replenishment oiler INS Shakti (A57) April 13 during Exercise Malabar 2012, the first time such an exercise has taken place between a U.S. aircraft carrier and an INS oiler.

“This certainly demonstrates our compatibility and desire to work with our strategic partners in the Indian Navy,” said Capt. Kent D. Whalen, Carl Vinson’s commanding officer. “This has never been done before, for a CVN to come alongside a brand-new Indian ship. It speaks volumes about our interoperability.”

“To me, one of the key events is the refueling piece, and the Gold Eagle team did fantastic,” Whalen added. “We demonstrated the ability to put the rigs together, and if we needed to, we could pass fuel like we do to Bunker Hill or Halsey from our aft station. It was neat to be able to demonstrate this capability and be the first CVN to do it.”

“There was a lot of research done to find out if they had the same double-probe setup we normally take. We sent [Lt. Cmdr. George Baldwin, Carl Vinson’s first lieutenant] to look at the equipment they had. It wasn’t the same, but we could make it work.”

“We have one consistent messenger line that carries every aspect of the underway replenishment station over. They had three separate lines, so once you get the first one across, you pull the second and third. So it took a little more time,” Miller observed.

Once the lines got across, the evolution progressed as usual – tensioning, de-tensioning, and moving the fuel hoses across the water. Carl Vinson Sailors had everything hooked up, connected, tested and sent back to Shakti by 4:30 p.m.

During the RAS, Indian Navy laison officers stood by Miller to observe the evolution firsthand.

“They were very polite. One of them used to be a deck officer on a previous tour, and he was very helpful with identifying what stage we were at during the UNREP,” Miller said. “We had communication radios on station, and their equivalent to me on the Shakti was very vocal about letting us know where we were at. The communication was outstanding.”

Miller noted the exercise produced another first, this one for the Shakti.

“This was the first time they’d ever used both their fuel probes. Prior to us, everyone they’d refueled was with a single probe only. There were some minor interface issues, but if we had needed to transfer fuel, we could have done it,” he said.

Miller observed that breaking new ground in refueling operations has been done aboard Carl Vinson before. In 2010, Carl Vinson was the first aircraft carrier to refuel a littoral combat ship (LCS). Still, he emphasized the opportunity Vinson seized when it conducted the RAS exercise with a foreign partner.

“Anytime you can work with other navies is very exciting. I’ve worked with French oilers, and it’s a totally separate rig. The Indian oiler was equivalent to ours, so you can see our concept of refueling and STREAM (standard tensioned replenishment alongside method) is spreading,” Miller said. “Our Sailors in Deck Department have done something they may never get to do again, so to be a part of that first-ever RAS means a lot to us. Deck Department Sailors were the ones who transferred this rig from one side to the other, and it makes them feel part of the mission and part of the Malabar exercise.” 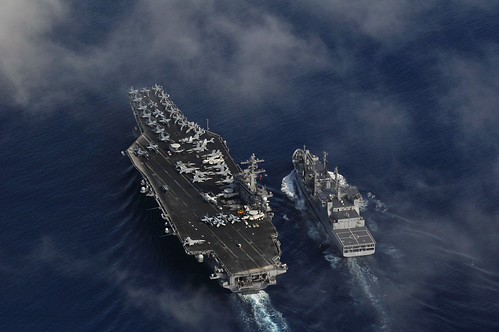