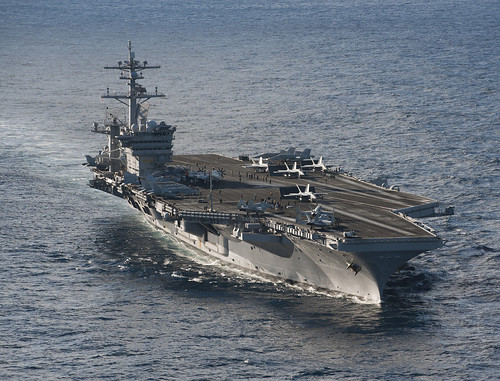 Vinson is currently transiting to her homeport in San Diego following a six-month deployment to the Western Pacific and Middle East areas supporting maritime theater security operations in the U.S. 7th and 5th Fleets.

"The dedication demonstrated by every Sailor up and down the chain of command was the key factor in accomplishing every mission objective for our time in the 5th and 7th Fleets," said Vinson's Commanding Officer Capt. Kent D. Whalen. "With our return to 3rd Fleet, our focus may have changed but our mission-ready mindset continues."

CVW-17 encompasses the "Sunliners" of Strike Fighter Squadron (VFA) 81, the "Stingers" of VFA 113, the "Redcocks" of VFA 22, the "Fists of the Fleet" of VFA 25, the "Garudas" of Electronic Attack Squadron (VAQ) 134, the "Tiger Tails" of Carrier Airborne Early Warning Squadron (VAW) 125, the "Rawhides" of Fleet Logistics Support Squadron (VRC) 40 and the "Red Lions" of Helicopter Anti-Submarine Squadron (HS) 15.

In addition to supporting its primary mission throughout the deployment, Carl Vinson completed the following:

- Deployed 7,283 pounds of ordnance and expended 1,717 rounds of 20mm ammunition in support of OEF. Conducted exercises with coalition countries and other nations, including Singapore, Britain, India and Australia.

- Hosted former CBS Evening News anchor and 60 Minutes correspondent Dan Rather for a three-day visit as the subject of a segment for television news magazine Dan Rather Reports.

- Sailed over 53,200 nautical miles. Third Fleet leads naval forces in the eastern Pacific from the west coast of North America to the international date line.