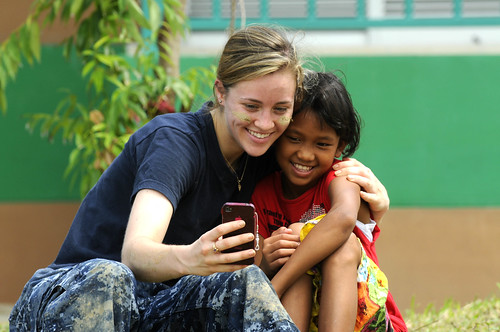 The port visit represented an opportunity for Sailors and Marines to serve as goodwill ambassadors from the U.S., promote peace and stability in the Southeast Asia region, to demonstrate commitment to regional partnerships, and foster growing relationships.

"Our visits to these different sites were of the utmost importance in the grand scheme of things," said Baker. "Probably not much strategic importance or national defense importance, but being able to bring light in some really dark situations from a humanity perspective."

"Honestly, the experience was life changing," said Ship's Serviceman 3rd Class Krista Stelzner who participated in all four COMSERVs in Thailand. "Going on those COMSERVs made me understand loving people. Every children's home we visited, the kids ran up to us and hugged us without even knowing who we were. All they wanted was love."

Another event involving Blue Ridge Sailors, gave several culinary specialists the opportunity to demonstrate their skill sets, have fun with rival Thai chefs, and reach out to a larger Thai audience through Thailand's Iron Chef television show that was filmed in front of a live audience in Bangkok.

"Iron Chef gives them the chance to go outside the box, show the talent they've learned from [Navy] schools and training and put their own personal touch on it," said Blue Ridge "Chow Boss" Chief Warrant Officer Brian Ware. "I think it's a great event, great morale booster, and something they'll never forget in their career.

Culinary Specialist 1st Class Frank Medina led a three-man team with Culinary Specialists 2nd Class Nelson Malaxi and Manuelito Belocura, who earned their spots on the team during a ship-wide competition while Blue Ridge was underway.

"I was humbled to take part in the show," said Medina. "I wanted to take this opportunity to learn from a master chef but I brought my best level of competition with my team members."

The U.S. has a longstanding relationship with Thailand going back to the early 19th century. In 1933, the two countries signed Treaty of Amity and Commerce, making Thailand (then called Siam) the 1st Southeast Asian nation to make a formal diplomatic agreement with the U.S.