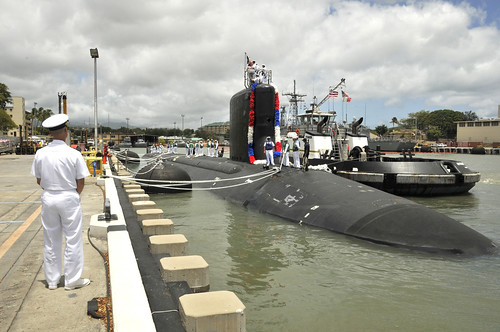 PEARL HARBOR, Hawaii - Family and friends gathered on the submarine piers to give a warm aloha arrival to the crew of the Virginia-class submarine, USS North Carolina (SSN 777), as she returned to Joint Base Pearl Harbor-Hickam after completing her maiden Western Pacific (WESTPAC) deployment, June 1.

With a crew of 141 Sailors, North Carolina sailed more than 35,000 miles during her deployment, making port calls in Yokosuka and Sasebo, Japan, Guam, and Subic Bay, Philippines.

"The deployment was an overwhelming success and I couldn't be happier with what the crew accomplished," said Cmdr. Richard Rhinehart, North Carolina commanding officer, "We completed all assigned tasking supporting 7th Fleet theater priorities while representing the Navy and the Submarine Force in several multinational exercises and foreign port visits."

This was the first overseas deployment for more than a third of the crew. Submarine qualifications were completed by 21 Sailors and three officers whom are now authorized to wear the Submarine Warfare insignia known to submariners as "dolphins."

"The experience gained by Sailors on their first deployment will be invaluable as some will transfer to other assignments in the fleet while others will use their experience on board as the North Carolina enters a training and readiness period in anticipation of her next deployment," said Rhinehart.

Electrician's Mate (SS) Anthony Thompson describes his first deployment as something he will never forget.

"This was a great deployment for me because I really increased my submarine knowledge and became submarine qualified," said Thompson. "I also enjoyed traveling all over the world and seeing some great places during our port visits. I am really looking forward to our next deployment."

Commissioned May 2008, North Carolina is the fourth ship of the Navy to carry the name North Carolina. She was built by General Dynamics Electric Boat Division in Groton, Conn., and Newport News Shipbuilding in Newport News, Va., and joined the fleet in December 2006.