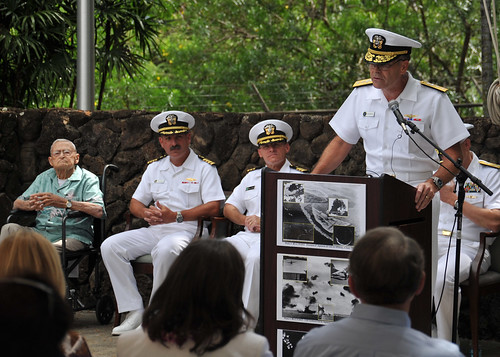 PEARL HARBOR, Hawaii - U.S. Pacific Fleet staff and guests gathered at the command's headquarters, June 1, and recognized the critical role of Navy operational intelligence in the Battle of Midway during a ceremony commemorating the battle's 70th anniversary.

The battle, which took place June 4-7, 1942, was a turning point in the Pacific campaign of World War II. Underestimating the strength of the U.S. Pacific Fleet, the Imperial Japanese Navy intended to invade Midway Atoll and to lure the American forces into battle. Aviators from the carriers USS Enterprise (CV-6), USS Hornet (CV-8), and USS Yorktown (CV-5) attacked the Japanese forces in what became a decisive victory for the U.S Navy.

"The goal here today is to recognize the marvelous work and the truly nation-saving work that these groups of cryptologists and Intel officers did for us," said Rear Adm. Patrick Driscoll, deputy commander, U.S. Pacific Fleet.

The U.S. Navy counter-attack would not have been possible had Navy operational intelligence not broken the Japanese military's complex message code. The achievements of Navy Intel allowed U.S. leadership to predict the movements of the Imperial Japanese Navy and act accordingly.

Present at the ceremony was retired Rear Adm. Donald "Mac" Showers, 92, the sole surviving member of Adm. Nimitz's Intel staff. The intelligence gained as a result of the dedication of this team was vital to the operations carried out at Midway.

Showers recalled to the audience the challenging process of his team's intelligence work leading up to the battle. "It took time, and it took talent, and it took research, and it took a lot of effort on the part of a lot of people," he said.