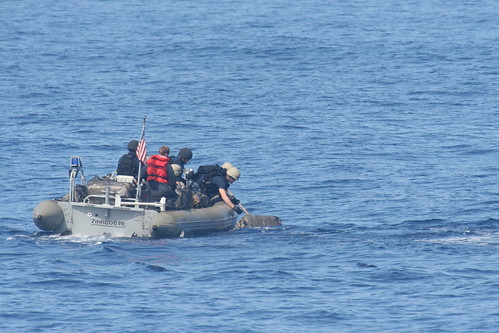 "The coordinated response of all hands involved was phenomenal," remarked Nimitz Strike Group Commander Rear Adm. Pete Gumataotao. "The combined efforts of each of our strike group components demonstrated the flexibility and capability that defines how we conduct business."

At approximately 1:50 p.m., USS Nimitz starboard lookouts, spotted two surface vessels, or contacts, approximately four nautical miles away and reported the contacts up the chain of command. The USS Nimitz crew then coordinated with HSC-6 to send MH-60S Seahawk helicopter 613 to perform a visual identification (VID) on the vessels.

"The [helicopter] was already in the air acting as plane guard for flight ops," said USS Nimitz' tactical action officer at the time. "When the Seahawk got overhead, they reported two white single engine boats about 25 feet in length, which immediately began dumping black hefty bags over the side. The small boats raced up to about 25 knots and fled to the east."

As the two small vessels fled at 2:22 p.m., USS Princeton, part of Carrier Strike Group 11, sent their rigid hull inflatable boats (RHIB) to investigate and retrieve the bags as evidence.

Eighty bales of marijuana, each weighing approximately 100 pounds, were recovered at that time.

At 5:05 p.m. USS Nimitz' officer of the deck spotted a small craft at approximately three nautical miles, which also appeared to be dumping in the sea. The USS Princeton positioned HSM-75's Lone Wolf 722, which is assigned to the USS Princeton, flying as a spotter for the rigid hull inflatable boats, or RHIBs, for further investigation. This caused those craft to flee as well.

"I thought it was pretty cool," said an HSC-6 pilot in the air at the time of the second spotting. "Most of the time we're a just-in-case asset. It was cool to be part of a situation where none of our guys got hurt and we were able to be a part of something bigger." USS Princeton and a Mexican naval ship that came on scene retrieved more than 186 bales. The bales were then transferred to the Coast Guard Cutter Edisto for transport to shore.

The USS Nimitz Strike Group is operating in the Pacific Ocean off the coast of California conducting carrier qualification operations.