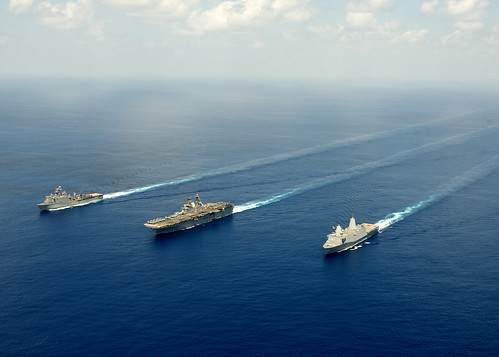 SAN DIEGO - More than 1,700 Sailors assigned to the Makin Island Amphibious Ready Group (ARG) are scheduled to return to their homeport of San Diego June 22 following a seven-month deployment.

During the seven-month deployment, the nearly 4,000 Sailors and Marines of the Makin Island ARG conducted maritime security operations (MSO) and theater security cooperation (TSC) exercises and events in the Western Pacific and U.S. Central Command areas of responsibility.

"In addition to the MSO mission, amphibious ready groups bring flexible assets into the theater that allow fleet commanders the ability to deliver combat forces, support humanitarian assistance and disaster relief missions, as well as noncombatant evacuations," said Capt. Donald Cuddington, commander, Amphibious Squadron 5. "During this deployment, the Sailors and Marines of the Makin Island ARG took part in a number of exercises and TSC events in support of our nation's maritime strategy."

Cuddington said highlights of the deployment included supporting exercises Kilat Eagle in Malaysia, MAREX 2012 in Cambodia, and numerous TSC events with other coalition partners in the Gulf region.

"A key component of our maritime strategy is building regional partnerships to ensure security, stability and prosperity in the Asia-Pacific region," said Cuddington. "Our deployment is proof of just that, and that we are a professionally trained fighting force also capable of humanitarian assistance and disaster relief if needed."

While deployed, the embarked 11th MEU participated in a total of 14 exercises with regional partners and host nations.

"We were able to sharpen our skills while strengthening partnerships with our hosts," said Col. Michael R. Hudson, 11th MEU commander. "From survival and jungle training in Cambodia and Malaysia to full-scale raids and live-fire exercises with counterparts throughout the Middle East and Horn of Africa, this deployment employed all the capabilities of our air-ground-logistics team."

Hudson said this was also the first operational deployment of the four-blade AH-1Z Viper helicopter. When deployed with the UH-1Y helicopter, the "Yankee-Zulu" package replaces the older two-blade Marine Corps AH-1W and UH-1N helicopters.

The new helicopters can carry an additional 2,000 to 4,000 pounds, travel faster and conduct combat operations from a safer distance. The AH-1Z and UH-1Y also share an 85 percent parts commonality, which streamlines training and maintenance.

"Although we are most capable as a three-ship [group], positioning our forces throughout our area of operations permitted Marines to be three and sometimes four places at once," said Hudson. "At one point, we were participating in three different large-scale exercises in the Western Pacific, while simultaneously planning three more. We were able to accomplish these exercises and other contingency-support missions because of the agility and capability inherent in a MEU embarked on amphibious ships."

Sailors and Marines from the Makin Island ARG also participated in a variety of community relations activities in a total of six different countries during the deployment. These projects included spending time with needy children and the elderly, making improvements to local schools and orphanages, and taking care of abandoned cats and dogs at animal shelters.

"Our Sailors and Marines successfully met every mission during our historical maiden deployment in support of the nation's maritime strategy," said Capt. Cedric Pringle, Makin Island's commanding officer. "As the Navy's first operational test platform for this hybrid-electric propulsion system, our fuel efficiency directly enhanced the ability to operate forward for longer. Additionally, our significant fuel cost savings, coupled with our lessons learned, will serve as a solid foundation for optimizing this ship, as well as current and future ship designs. The value of our first deployment will continue to increase, as we assess required refinements in engineering subsystems, training, and logistics support."

Hundreds of family members joined the Sailors and Marines on each of the three ships for the final leg of the deployment, from Hawaii to California, as part of a scheduled Tiger Cruise.

Makin Island, New Orleans, and Pearl Harbor are assigned to Expeditionary Strike Group Three within the U.S. Third Fleet and homeported in San Diego. Third Fleet leads naval forces in the Eastern Pacific from the west coast of North America to the International Date Line.