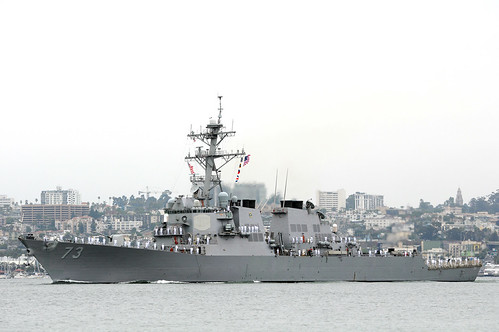 SAN DIEGO - The guided-missile destroyer, USS Decatur (DDG 73) is scheduled to depart Aug. 17 for an eight-month independent deployment to the 7th Fleet and 5th Fleet areas of operation in support of maritime security operations and ballistic missile defense.

"The crew of Decatur has been working tirelessly throughout 2012 to prepare for this deployment," said Cmdr. Joel Ellingson, commanding officer of Decatur. "I am proud of the crew and we are ready to conduct maritime security operations and ballistic missile defense in support of fleet objectives. We would like to thank the family and friends of Decatur for their continued support as we depart on deployment."

Decatur is the fifth ship named after Stephen Decatur who is noted for his heroism during the Barbary Wars and the War of 1812. USS Decatur helps provide deterrence, promote peace and security, preserve freedom of the seas, and humanitarian/disaster response within 3rd Fleet's 50-million square mile AOR in the Eastern Pacific, as well as supporting the Navy's Maritime Strategy when forward deployed.