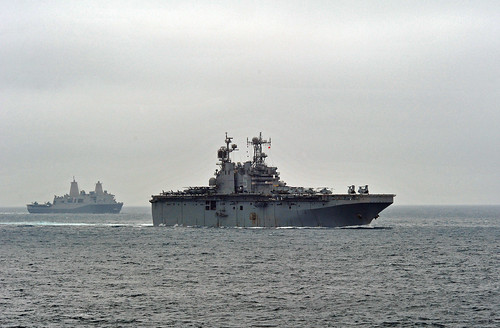 SAN DIEGO - After more than eight months of rigorous training in preparation for a deployment across the Western Pacific, the 15th Marine Expeditionary Unit and the Peleliu Amphibious Ready Group are beginning the final certification exercise (CERTEX) Aug 15.

The MEU already conducted two other at-sea periods that focused on skill sets pertaining to the missions a MEU may face while forward deployed. However, CERTEX is different than previous exercises. Marines and Sailors will not know what to expect and will have to react to scenarios quickly using the Marine Corps' Rapid Response Planning Process to prepare for the missions the unit will execute.

"As we enter the final stage of our training cycle, the MEU and ARG are fully prepared to respond as America's 911-force in readiness," said Col. Scott D. Campbell, commanding officer, 15th MEU. "The training up to this point has been realistic, purposeful and very demanding on our Marines and Sailors. They have proven themselves time and again, and they are ready to complete the certification process and move forward to answer our nation's call."

The two-week evolution will also be the final iteration the blue-green team will conduct together before their deployment this fall. During the past few months, the Peleliu Amphibious Ready Group and the 15th MEU have formed a cohesive unit capable of mission planning within a constrained six-hour requirement.

"The Peleliu Amphibious Ready Group has rigorously trained for the many missions that we could face on deployment," said Capt. Mark Sakaguchi, commander, Amphibious Squadron 3. "The partnership and skills our blue-green team have developed ensure the Peleliu ARG and 15th MEU are ready to operate forward over a wide range of military operations."

In addition to an unknown training schedule, the MEU staff will also be accompanied by counterparts from other MEUs. They will assess the 15th MEU's capabilities and prepare for future deployments through observation.

CERTEX qualifies the MEU to deploy, and it is also another chance for the Marines and Sailors to get more repetitions of training before conducting actual missions.

"Repetitions equal proficiency," said Campbell. "The more opportunities we have to practice what we do, the more it will make us a stronger, more formidable force."

By the end of CERTEX, the commanding general of I Marine Expeditionary Force, Lt. Gen. Thomas D. Waldhauser, is expected to give the approval for the 15th MEU to conduct its deployment to the Western Pacific.