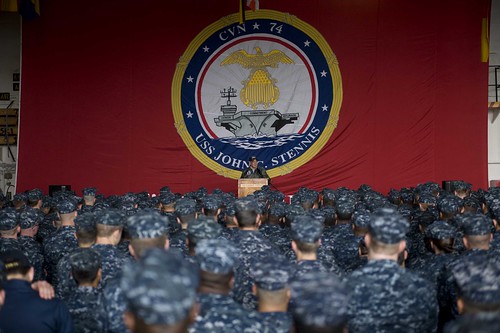 Secretary of Defense Leon Panetta spoke here Wednesday with the crew of the ship to thank them for the extraordinary effort to prepare for this upcoming deployment.

"I understand that it is tough," said Panetta. "We are asking an awful lot of each of you, but frankly you are the best I have and when the world calls we have to respond. You are the heart and soul of our national defense. You are the heart and soul of what makes America strong. That's why I'm here. To thank you for what you do to help keep America the strongest military power in the world."

JCSSG is returning to the U.S. 7th and 5th Fleet areas of operation four months ahead of schedule in order to maintain combatant commander requirements for the presence in the region. Stennis returned in March from its most recent deployment.