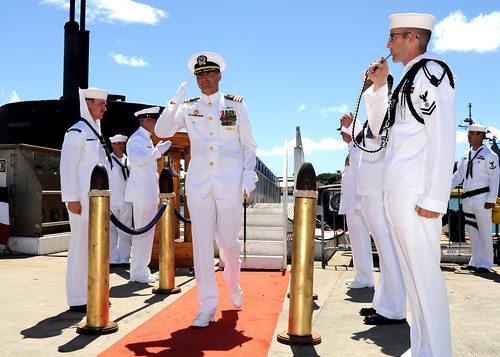 In this file photo, Cmdr. Lee P. Sisco is piped ashore having been relieved as commanding officer of the Los Angeles-class submarine USS Louisville (SSN 724) by Cmdr. Robert D. Figgs at a change of command ceremony held at the submarine piers on board Joint Base Pearl Harbor-Hickam, Sept. 6. (U.S. Navy photo by Mass Communication Specialist 3rd Class Sean Furey / Released).

PEARL HARBOR, Hawaii - A time-honored change of command ceremony was held aboard the Los Angeles-class submarine USS Louisville (SSN 724) at the submarine piers at Joint Base Pearl Harbor-Hickam, Sept. 6.

Guest speaker Capt. Douglas G. Perry, Chief of Staff for the Joint Force Development Directorate on the Joint Staff and Sisco's former commanding officer and mentor, praised Sisco for his exceptional performance while in command of Louisville.

"Lee, you've done an immense service to the country. We are in your debt, and you have a very bright future in front of you," said Perry.

Sisco said he was honored to have the opportunity to command Louisville and acknowledged that the majority of the submarine's success during his time as commanding officer was because of the crew and their hard work.

"I know I drove you hard and was demanding, but you listened to what I asked," said Sisco to his assembled crew. "We tried to do things the right way, and we did the right things."

Following his remarks, Sisco was awarded the Meritorious Service Medal for his exceptional performance as commanding officer from Jan. 2010 to Sept. 2012.

As Figgs assumed command of Louisville he addressed the crew about the future.

Sisco will report for duty to commander, Naval Personnel Command in Millington, Tenn., as the branch head for enlisted nuclear and submarine assignments.