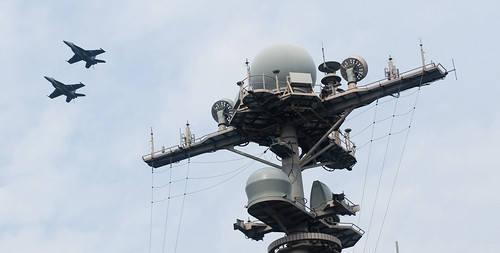 Ships of the forward-deployed George Washington CSG, to include the aircraft carrier USS George Washington (CVN 73), its embarked air wing, Carrier Air Wing (CVW) 5, the guided missile cruiser USS Cowpens (CG 63) and the guided missile destroyer USS McCampbell (DDG 85); coupled with the ships of the John C. Stennis CSG, to include the Bremerton, Wash.-based aircraft carrier USS John C. Stennis (CVN 74), its embarked CVW 9, and the San Diego-based guided-missile cruiser USS Mobile Bay (CG 53); are currently patrolling the Western Pacific. They are providing a combat-ready force that protects and defends the collective maritime interest of the United States and its allies and partners.

"As commanding officer of the U.S. Navy's only forward-deployed aircraft carrier, I have the honor and opportunity to operate in one of the most dynamic and vital areas of the world," said Capt. Greg Fenton, USS George Washington's commanding officer. "As the focus continues to turn to the Asia-Pacific region, we and other forward-deployed forces will continue to promote peace, cooperation and stability within the region. We accomplish this by continuously training and meeting with our Asia-Pacific partners and allies, both bilaterally and multilaterally, to improve interoperability and to be prepared to collectively respond to any natural or man-made crisis in the region."

Commanded by Rear Adm. J.R. Haley, the George Washington CSG recently completed the U.S. joint exercise Valiant Shield 2012 in the Guam operating area. Valiant Shield emphasized the importance of joint interoperability as the key component by which success is dictated and measured.

The two CSGs are part of a strong U.S. naval presence in the Pacific that has helped to maintain peace and stability in the region as part of the U.S. 7th Fleet, which was established 69 years ago. USS John C. Stennis returned to the 7th Fleet's area of operation four months ahead of schedule to maintain combatant commander requirements for its presence in the region. The crew has been engaging in live-fire exercises, torpedo countermeasures exercises and numerous other training exercises during its current deployment and transit to the U.S. 5th Fleet area of operations.

The U.S. Navy routinely conducts simultaneous CSG operations when and where opportunities exist and are operationally feasible. While operations such as this ensure peace and stability, they also allow the two CSGs to improve interoperability and readiness. They further provide the Navy the capability to respond quickly to various situations throughout the Asia-Pacific region, ranging from combat operations to humanitarian assistance missions.

"There are some very unique challenges in this part of the world," said Rear Adm. Chuck Gaouette, commander of the John C. Stennis CSG. "All nations in this region have a vested interest in regional stability and freedom of navigation. We are here to continue to strengthen partnerships and promote peace and security in the region."