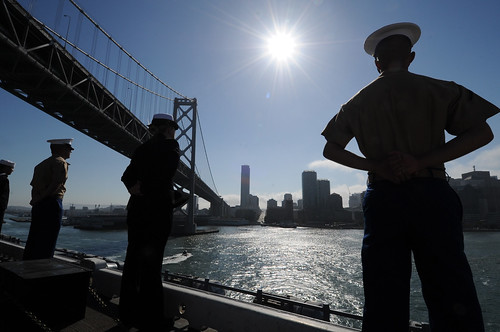 Sailors and Marines man the rails aboard the amphibious assult ship USS Makin Island (LHD 8) as the ship passes under the Bay Bridge while making its way into the city Oct. 3 for San Francisco Fleet Week. (U.S. Navy photo by Chief Mass Communication Specialist John Lill)

San Francisco Fleet Week 2012 (SFFW 12) is an opportunity for the American public to meet their Navy, Marine Corps and Coast Guard team and to experience the best of the sea services. More than 2,500 Sailors, Marines and Coast Guardsmen are scheduled to participate in SFFW 12 to celebrate the shared maritime history of the naval services and the Bay Area. This event will showcase naval personnel, equipment, technology and capabilities with an emphasis on humanitarian assistance and disaster response (HA/DR).

SFFW 12 will include the third annual Senior Leadership Seminar (SLS), which brings together leaders from the military along with local, regional, state and federal agencies and the private sector to discuss their capabilities to respond to a natural disaster in the Bay Area. The SLS provides senior Navy, Marine Corps, and Coast Guard leaders an excellent opportunity to build partnerships with their local, state and regional counterparts that are involved in disaster preparedness and response.

There will be several opportunities for the public to interact with the crew and leadership of the participating ships during SFFW 12. In addition to the SLS, there will be an HA/DR-themed static display area at the Marina Green, ship tours, Urban Search and Rescue Training involving SFPD, SFFD, Sailors and Marines at Treasure Island, the Parade of Ships, Battle of the Bands in Golden Gate Park, and Navy, Marine Corps and Coast Guard participation in the Italian Heritage Day Parade and the San Francisco 49ers Military Salute game. Additionally, the Blue Angels will perform along the waterfront during the Fleet Week air show.

U.S. 3rd Fleet leads naval operations across 50 million square miles of the eastern and northern Pacific Ocean, from the west coast of the United States to the International Date Line.