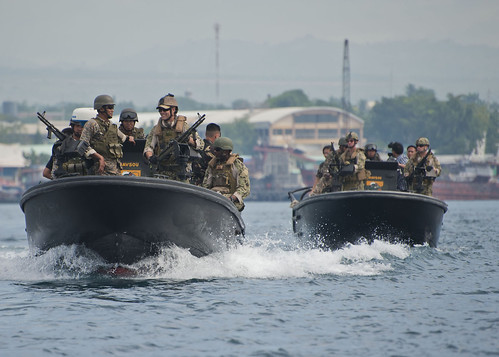 The establishment of NECC PAC is a significant milestone. The standup formalizes a direct administrative relationship between NECC and Commander, U.S. Pacific Fleet – a linkage that hasn't existed since NECC's establishment in 2006. Rear Adm. Michael P. Tillotson will serve as commander of both NECC and NECC PAC.

"NECC and NECC PAC staffs will synchronize their operations and work closely 'to speak with one voice' on issues confronting the force," said Capt. Frank Hughlett, NECC PAC chief of staff.

The NECC PAC staff will be relatively small and manned by uniformed personnel and civilian employees. Hughlett will oversee day-to-day operations for the Hawaii-based staff.

EOD teams deploy to areas like Japan, the Republic of the Philippines and Guam. EOD are deployable forces for expeditionary and combat EOD operations that conduct detection and demolition of hazardous ordnance in support of Navy, joint and coalition forces. Construction projects are ongoing in the Pacific and are carried out by seabees assigned to Naval Mobile Construction Battalions. Many projects provide humanitarian and theater security cooperation. Exercise participation by NECC units in the Pacific region provides unique training opportunities that help build relationships and ensure the safety of sea lanes and security throughout the region.

NECC is an enduring force providing capability across the full range of military operations in the maritime strategy to include forward presence, maritime security and power projection, now and in the future.