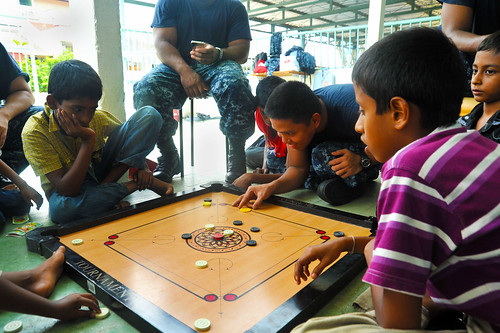 Forty-four Sailors volunteered at the Trinity Children's Home in Selangor, Malaysia, where they played with the children, performed minor maintenance and cleaning, and setup donated sports equipment.

"We set up a few games for them; a basketball hoop, a soccer net, and a badminton net," said Information Systems Technician 1st Class Ricardo Morales, from Bronx, N.Y. "We helped them trim back trees that were encroaching on the property, fixed their fence, and helped to repair a hole in their roof."

This was one of six outreach projects organized by George Washington's Command Religious Ministries Department during the ship's first ever visit to this Asia-Pacific partner.

"It was fun, it reminded me of being home and playing with my little sisters and everything," said Aviation Ordnanceman Airman Apprentice Shakeia Kegler, from St. Petersburg, Fla. "We were out making up games and playing sports with them."

The sporting equipment was donated from the U.S. as a part of Project Handclasp, a charity which provides donations and goods through the Navy.

"The children were very excited; you can hear the happiness in their voices," said Nancy Clemons, the co-founder of Trinity. "The Sailors had a lot of enthusiasm and interacted with the kids really well. The kids loved the toys and had a great time playing soccer and learning basketball."

Trinity was founded in 1998 and has around 20 children at a time, who stay until they are 18-years-old. The children are single-family orphans or come from abusive families.

"I hope that the Navy continues to come and visit us, whether we are here or anywhere we move to, for as long as they can," said Clemons.

George Washington and its embarked air wing, CVW 5, provide a combat-ready force that protects and defends the collective maritime interests of the U.S. and its partners and allies in the Asia-Pacific region.