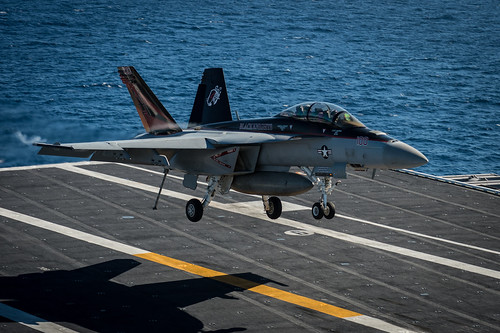 COMPTUEX is an 18-day exercise required for each CSG, and designed to drill every warfare area including sub surface, surface and air, to practice responses to situations that may occur on deployment.

Embarked Strike Force Training Pacific evaluators will test the CSG on its integrated operational capabilities through a series of simulations.

This is the first time the strike group has worked together since Rim of the Pacific (RIMPAC).

"It's unusual that we have done some integrated training," said Cmdr. Larry Sidbury, Nimitz operations officer. "We had the opportunity to work together in RIMPAC where the whole CSG participated. During a normal turnaround cycle we would not have gotten an opportunity."

COMPTUEX is broken up into phases. Phase one provides a detailed schedule of events (SOE) and specific task training for CSG and warfare commanders. Phase two consists of real-world exercises and no SOE.

"No doubt each of these phases will challenge our ability to effectively manage and employ our limited resources," said Rear Adm. Peter Gumataotao, commander, CSG 11. "We need to embrace a fundamental mindset shift from training to certification."

Nimitz will simulate a straits transit with other ships from the strike group, participate in replenishments at sea, vertical replenishments, and run many general quarters drills.

"It's going to be a busy time because we're going to get exposed to every mission area in such a condensed amount of time," said Sidbury. "With the amount of work that needs to be accomplished during this time, I think it's going to push people to a fairly high OPTEMPO [operations tempo]."

Unit specific training will allow the separate strike group assets to practice their roles individually, while other situations will test the strike group's ability to react as a single force.

"Give 100 percent because the next time we sail, we may be standing in harm's way," said Gumataotao. "Execute as you have diligently trained for this moment and continue to make me proud."

After successful completion of COMPTUEX, Nimitz and the rest of the CSG will move on to the final exam, joint task force exercise, preparing Nimitz for her 2013 deployment.