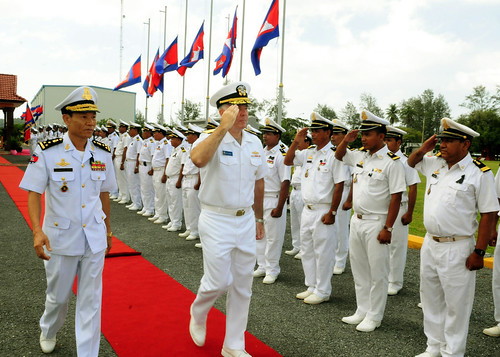 He then noted that CARAT Cambodia was a relatively new, but progressive exercise.

"Two years have passed since 2010 when the inaugural CARAT Cambodia marked the first dedicated naval exercise between the United States and Cambodia in decades," Carney said. "Since then, the U.S. Navy and Royal Cambodian Navy have built upon previous CARATs to make this year's exercise more productive."

Carney stressed that CARAT was part of year round navy-to-navy engagement with Cambodia, including routine port visits by U.S. Navy ships, such as the U.S. Seventh Fleet command ship, USS Blue Ridge (LCC 19) this spring, and other military exercises like Pacific Partnership 2012.

For 2012, CARAT Cambodia will include four days of events in port and 36-hours at sea. While in port, a variety of subject matter expert exchanges, symposia and community service projects and sporting events will allow members of both navies to share best practices and build friendships. There will also be a band concert held in Kampot Province.

During the at-sea phase, U.S. and Royal Cambodian Navy ships will get underway to practice a range of competencies, including formation maneuvers, gunnery and maritime security exercises.

CARAT is a series of annual, bilateral maritime exercises between the U.S. Navy and the armed forces of Bangladesh, Brunei, Cambodia, Indonesia, Malaysia, the Philippines, Singapore, Thailand, and Timor Leste.