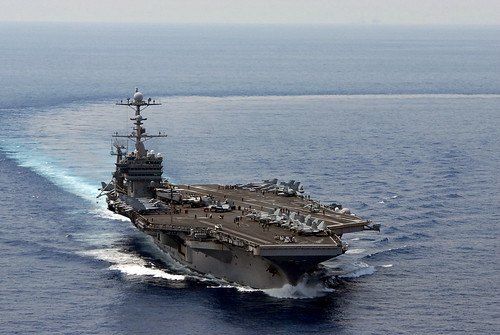 The Nimitz-class aircraft carrier is conducting a five-day goodwill visit that highlights the strong historic, community and military connections between the United States and the island nation.

"We have a longstanding history of partnership with the Philippines dating back to the Spanish-American War, and we are always appreciative of the opportunity to be able to work with one of our regional partners," said Capt. G.J. Fenton, George Washington's commanding officer. "My Sailors also appreciate the opportunity to engage in new surroundings and for them to be able to visit a nation with such diversity will be a crowning moment in a lot of their lives."

George Washington hosted Ambassador Harry Thomas, U.S. Ambassador to the Republic of the Philippines, as well as members of his staff at the embassy the day prior to its arrival in Manila. The visitors observed flight operations from the ship's flight deck, and toured George Washington's combat direction center, flight deck control, hangar bay and navigation bridge in order to better understand the general orientation of an underway nuclear-powered aircraft carrier.

"George Washington's visit to the Philippines shows that our 61-year-old mutual defense treaty is still alive," said Thomas. "It shows that the United States is committed to the Filipino people, and that we actively support a reliable partner and a strong ally."

George Washington will also host a welcome reception aboard the ship for hundreds of Filipino dignitaries and distinguished visitors, and U.S. embassy and military personnel. One more visitor is expected to attend: The Honorable Ray Mabus, Secretary of the Navy (SECNAV).

"It is a genuine pleasure to open our doors to [SECNAV] because this visit will illustrate not only the Department of Defense's commitment to the George Washington Carrier Strike Group's mission, but also the United States' non-wavering commitment to our continued partnership with a respected, regional ally," said Fenton.

George Washington's visit to the Republic of the Philippines will allow the ship's crew to take a break from the arduous operational tempo that comes with forward-deployed life.

"As the Navy's forward-deployed aircraft carrier, we fly more often and operate in a less forgiving operational environment than any other carrier in the fleet; the crew deserves a break," said Legalman 1st Class Manny Gaona, from Greeley, Colo. "With us being allowed to visit the Philippines, we will be able to spend some time taking in the sights and enjoying some much-deserved rest and relaxation."

The Republic of the Philippines holds many unique types of local cuisine, cultural attractions and shopping that offers Sailors plenty of opportunity to unwind after spending a significant amount of time at sea.

"This is my first visit to the Philippines and I am looking forward to experiencing the culture," said Ship's Serviceman Seaman Matthew Davis, from Long Island, N.Y. "I want to try some of the local food and also visit the Mall of Asia to pick up some souvenirs for the family back home."

George Washington Sailors will also have the opportunity to interact with the locals via several community service projects set up by the ship. Projects include interacting with school children, teaching basic first-aid at a local hospital facility, and general cleaning and landscaping.

"My Sailors willingly volunteer their time because they genuinely want to help their fellow man," said Fenton. "This is a constant in each of our port visits and this fact is not lost on a lot of people; these men and women have a significant impact on the many lives they help. At the end of the day, we all walk away feeling like we've made a difference in someone's life, and that is truly the most rewarding feeling that anybody can have."

George Washington's visit to the Republic of the Philippines is also seen as a homecoming of sorts to Filipino-born members of the crew; George Washington has more than 800 Sailors of Filipino descent currently serving aboard.

"I have tried several times to go back home, but actually setting foot in the Philippines has evaded me; I have not seen my sisters in 21 years," said Command Master Chief Dioscoro Crucillo, from Manila, command master chief of the "Royal Maces" of Strike Fighter Squadron (VFA) 27. "With the pride and the gifts that my time in the Navy has been fortunate enough to afford me, I want my return to the Philippines to show that I am still the same man I always have been; a native son, proud of both worlds, and immensely excited to share them with each other."