USS Curts to Decommission after 29 Years of Service 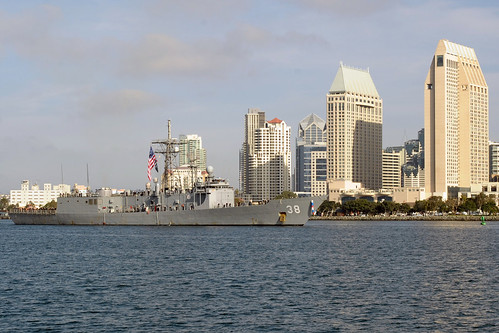 SAN DIEGO - The guided-missile frigate USS Curts (FFG 38) is scheduled to be decommissioned after 29 years of service in a ceremony on Naval Base San Diego, Jan. 25.

Curts, named for Admiral Maurice Curts and nicknamed ".38 Special" by her first crew, was commissioned on Oct. 8, 1983 at Naval Station, Long Beach, Calif.

After being forward deployed to Japan in the 90s, Curts made San Diego home and changed missions to the interdiction of illicit drugs and cargo. In 2004, Curts received national notoriety for seizing 12 tons of cocaine in the largest maritime cocaine interdiction in history.

"After 29 years of faithful service ".38 Special" leaves the fleet the same way she entered: Ready to Fight," said Cmdr. Fermin Espinoza, Curts' commanding officer. "That readiness to fight is due to the efforts of all the fine Sailors that served aboard during Curts' storied history."

During Curts' final deployment to the Eastern Pacific and Caribbean Sea, she seized more than $26 million in cocaine and marijuana, detained more than 30 alleged traffickers and scuttled seven vessels.

USS Curts provided deterrence, promoted peace and security, preserved freedom of the seas, and humanitarian/disaster response in the 3rd, 5th and 7th Fleet Areas of Operation, as well as, in the Eastern Pacific and Caribbean Sea during her time in commission.