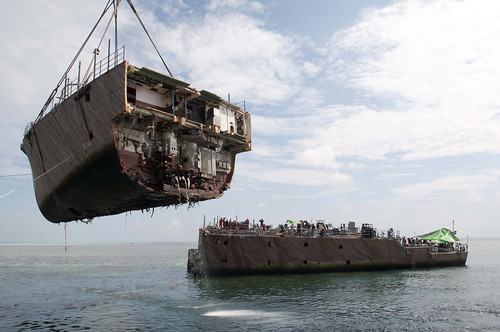 SULU SEA - U.S. Navy and contracted salvage personnel embarked aboard M/V Jascon 25 have begun dismantling and sectioning the hull of the grounded mine countermeasures ship Ex-Guardian. The bow section was safely lifted and removed from Tubbataha Reef to an awaiting barge, March 26.

This work has been accomplished in close coordination with the Philippine Coast Guard, Philippine Navy, and Tubbataha Reefs Natural Park. The remaining three sections will be removed over the coming days as weather and safety permits.

"Preparing the ship for this sectioning has been extremely challenging. We have had to painstakingly clear about a two foot path inside the ship, removing everything that is in our way," said Supervisor of Salvage, Capt. Mark Matthews. "Once the path is clear, the hull cutting is done manually by Navy divers and salvage contractors using chainsaws and reciprocating saws, and some of this cutting is underwater using hydraulically driven tools."

Since the Guardian's grounding, the Navy has been working meticulously to salvage any reusable equipment and remove any potentially harmful materials including petroleum-based products and human wastewater.

"The lifting of the first large hull section was a significant accomplishment. Each of these sections weigh about 250 tons," said Matthews.

No fuel has leaked since the grounding and all of the approximately 15,000 gallons aboard Guardian were safely transferred off the ship.

"We continue to work closely with the Philippine Coast Guard, Navy, and Tubbataha Reef Park Rangers, and we are grateful for the support and advice we have received to remove Guardian and minimize further damage to the reef," said Matthews.

There were no injuries when Guardian ran aground Jan. 17 following a port visit to Subic Bay while in transit to Indonesia.

Along with the Jascon 25, the USNS Safeguard (T-ARS 50), the SMIT Borneo, the Trabajador, the Intrepid and the Archon Tide remain on scene supporting the salvage operation.