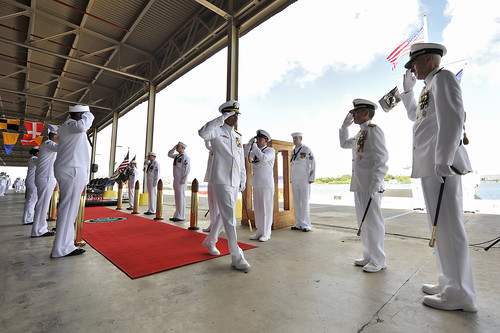 PEARL HARBOR - With the USS Arizona and Battleship Missouri Memorials as a backdrop, Adm. Harry B. Harris Jr. relieved Adm. Cecil D. Haney as commander of U.S. Pacific Fleet during a change of command ceremony on Joint Base Pearl Harbor-Hickam, Oct. 16.

"The only thing that makes my departure a little easier is knowing that my good friend and Naval Academy classmate Adm. Harry Harris is my replacement," said Haney. "He has had an exceptional career filled with challenging assignments that have more than prepared him to command the Pacific Fleet. He knows the Indo-Asia-Pacific region and fully understands its complexities."

Haney spoke of those complexities, and how the Navy's historic role in the region will continue to promote security, stability, prosperity and peace.

"Our nation today looks to the future as we rebalance to the Indo-Asia-Pacific," said Haney, who assumed command in Jan. 2012 near the beginning of the rebalance initiative. "The world watches to see how economically and politically this rebalance will work. We've faced austere economic cycles and political turmoil in the past, but we've maintained a continuous, robust and capable naval presence in the Pacific since World War II."

"Given the consistent message of our political and military leadership, I can stand on firm ground and predict that the U.S. will remain a Pacific power far into the future," Haney said. "It has been fantastic to see new capability join this vibrant theater … the new littoral combat ship, Virginia class submarine, EA-18 Growlers, MV-22 Ospreys, and MH-60 Romeo and Sierra helicopters."

"As excited as I am about our new platforms, I am even more excited about the rebalance of intellectual focus and leadership attention to a region where trillions of dollars of trade flows," Haney said. "Given the uncertainty in the region regarding friction over sovereignty claims and certain nation state provocations, we must continue to maintain a combat-ready Fleet while working peaceful solutions using existing international norms and multilateral approaches."

"Your strategic vision has set the stage for a new level of engagement, dialogue and consistence inside the PACOM area of responsibility," said Locklear. "You have really done wonderful things in increasing the coordination and information sharing with our allies, to growing those critical partnerships, and on the Navy making sure the rebalance to the Asia-Pacific was real and realized."

Locklear presented Haney with the Distinguished Service Medal. The award highlighted Haney's efforts in achieving an unprecedented level of Fleet combat readiness, advancing regional partnerships, and leading the 2012 Rim of the Pacific, the largest multinational naval exercise in modern history.

"This award is more about the hard work and sacrifice of so many outstanding Pacific Fleet Sailors, civilians and family members," said Haney, who moves on to lead the U.S. Strategic Command in Nebraska. "They are the ones who have earned it and who I sincerely thank for their hard work during my tour."

After reading orders and assuming command, Adm. Harris thanked the men and women of the Pacific Fleet saying: "What you do on a daily basis is of fundamental importance to our nation's defense -- I'm proud to be your commander." As the former assistant to the Chairman of the Joint Chiefs of Staff, Harris said he would continue the Pacific Fleet's commitment to the rebalance "with our brothers and sisters" in the Air Force, Army, Marine Corps, Special Operations and Coast Guard.

"Our president and secretary of defense are clear," said Harris. "As a nation, we will rebalance to the Pacific and we will work closely with our allies and partners in the Indo-Asia-Pacific region."

Harris is the 34th naval officer to command the Pacific Fleet since it was established in February 1941 with headquarters at Pearl Harbor, Hawaii. He graduated from the Naval Academy in 1978, is a MIT Seminar 21 fellow, and has attended Harvard's Kennedy School of Government, Georgetown's School of Foreign Service, and Oxford University for East Asia security.

As commander of Pacific Fleet, Harris is responsible for 100 million square miles 'from Hollywood to Bollywood, from Antarctica to the Arctic Circle.' Covering more than half the Earth's surface, the Indo-Asia-Pacific region is vital to U.S. economic and security interests. Pacific Fleet maintains combat-ready and forward-deployed naval forces that consist of approximately 200 ships/submarines, 1,100 aircraft and 140,000 Sailors and civilians. Whether called to fight and win or to protect the peace, Pacific Fleet operates alongside allies, partners and multilateral organizations to ensure a stable and secure Indo-Asia-Pacific where all nations can prosper. 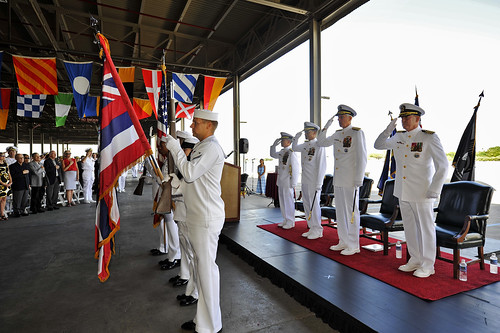 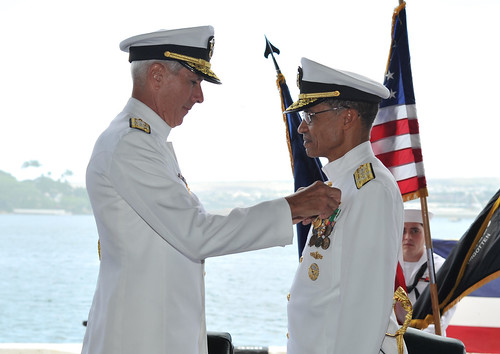 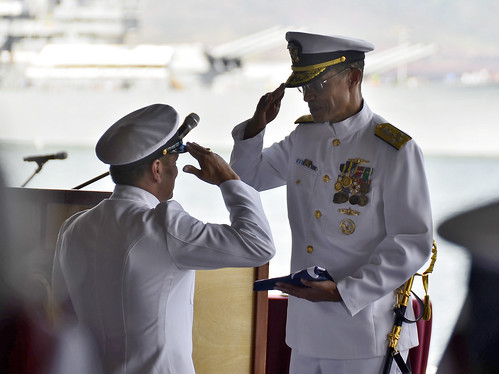 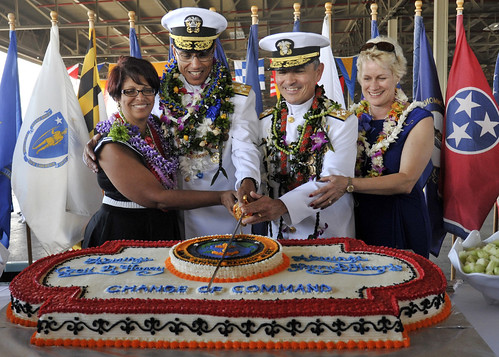 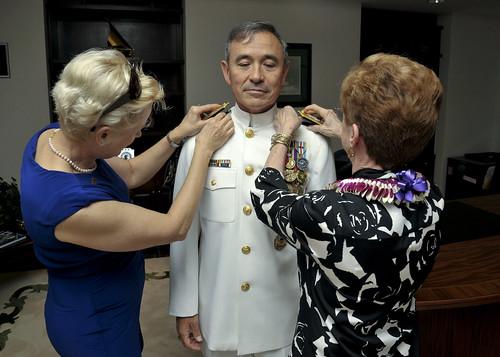 Adm. Harris has his new admiral shoulder boards placed on his uniform prior to the change of command ceremony by his wife Bruni Bradley, left, and Linda MacKay. (U.S. Navy photo by Mass Communication Specialist 1st Class Amanda Dunford/Released)