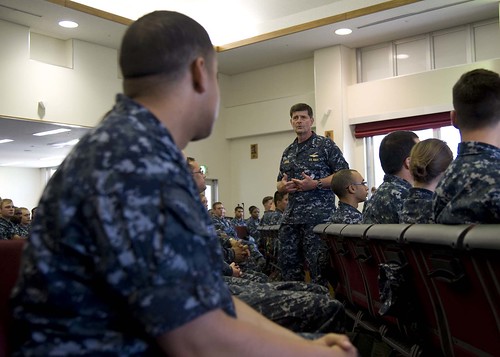 Vice Adm. Bill Moran speaks with Sailors during an all hands call in Sasebo May 19. where he addressed issues such as career sea pay, fleet manning and the career navigator program. (U.S. Navy/MC3 Justin Peeler)

WASHINGTON - The Chief of Naval Personnel (CNP) visited forward deployed fleet units in Sasebo, Japan, to meet with Sailors and families May 19 and 20.

Later this week, cycle 223 E4/5/6 advancement results will be released, CNP addressed the slight decrease in advancement opportunity this cycle.

"Retention is strong, as more and more high quality Sailors are deciding to 'stay Navy,' causing a down tick in the advancement rate," said Moran. "Advancements, at or near the ten-year average, was what we expected and we are just about there. However, moving forward, the goal is greater stability across the board-in end-strength, advancement rates and community health."

"To ensure we continue to advance the right Sailors, COs and CMCs told us these changes were needed," said Beldo. "The new calculation rewards those Sailors who are our top performers. No longer will folks simply be able to 'hang around' to make rate."

She encouraged Sailors to get familiar with the new FMS by reading about it on All Hands Magazine Online.

"I want to be clear CAP isn't going anywhere, the number of CAP quotas isn't going to change," CNP said. "The new changes simply add structure to when CAPs can occur--ensuring we balance rating health with rewarding performance."

May is the first month that increases to Career Sea Pay are in effect, and Moran said that the Chief of Naval Operations (CNO) and he continue to work on additional incentives to reward Sailors assigned to sea duty.

With increases to standard deployment time, Moran said Navy leadership's goal is to get a high deployment pay in place this year to compensate Sailors serving at sea for long periods of time.

"As our Navy continues to be in high demand, deployment lengths and operating tempo will remain above historic norms," said Moran. "It's important we compensate our folks for this arduous duty. We are working the policy now and expect to be able to share details in the next several weeks.

CNP and Beldo answered questions at each event. Many Sasebo Sailors were interested in knowing if training opportunities would be expanded for those serving as part of the forward deployed naval force in Japan.

Moran told audiences that his staff was working with the type commands to find ways to expand available training opportunities for Sailors in Japan.

"We have to do a better job of providing training in route to Sailors headed over seas, and look for ways to increase our waterfront resources. Sending folks to San Diego or Hawaii after we've moved them out here can't be our only answer--we have to be smarter and more efficient."