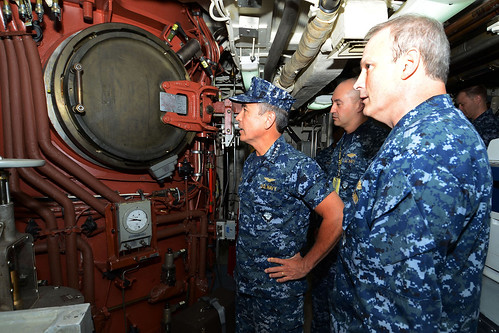 BANGOR, Wash. - Commander of U.S. Pacific Fleet Adm. Harry Harris visited the Naval Base Kitsap-Bangor Submarine Force May 20 to congratulate them on a job well done and to stress the importance of the work they do as a part of the Navy's rebalance to the Pacific.

During his time on base, Harris visited Submarine Group (SUBGRU) 9, Strategic Weapons Facility, Pacific Fleet (SWFPAC), the USS Louisiana (SSBN 743) Gold Crew, Submarine Development Squadron (SUBDEVRON) 5, the Trident Training Facility and held an all-hands call at the base theater. During each visit he made, he shared his gratitude for what the ballistic (SSBN) and guided missile submarines and support commands accomplish daily.

"The Pacific Northwest is playing a huge part in the Navy's overall rebalance to the Pacific. Each time you deploy, you are supporting our national interests in the region," Harris said.

Harris spoke with the commanders from each command he visited, and during the all-hands call he spoke to the Pacific Northwest submarine force. He discussed topics such as the upcoming Ohio-replacement program and threats throughout the region.

"The all-hands call was very interesting and informative," said Fire Controlman 1st Class Eric Zacharda, assigned to USS Pennsylvania (SSBN 735) Blue Crew. "I don't always see the big picture in the world, so it was great to get his perspective on the world and what's on the horizon. It's also good to know he appreciates what we're doing out here and values it."

"Our goal is to have 60 percent of the Navy's assets in the Pacific by the end of the decade," said Harris. "The submarine force in the region, with our guided missile, ballistic missile, and fast-attack submarines, is already there so you're ahead of the game."

One of the key points Harris made to the submarine force was the vital mission ballistic and guided missile submarines play in the strategic deterrence triad.

"Replacing our current fleet of SSBNs with the next generation ballistic missile submarine is a national priority," he said.

Harris' main focus, though, was ensuring the Pacific Northwest submarine force received big recognition for what they've been able to accomplish. He noted the USS Nebraska and their recent recognition by U.S. Strategic Command as the 2013 Omaha Trophy winner for the submarine force.

"You are accomplishing some great things and I want to take this opportunity to publicly thank you for what you do," Harris said. "The role Sailors from this area play every day in our nation's defense cannot be overstated." 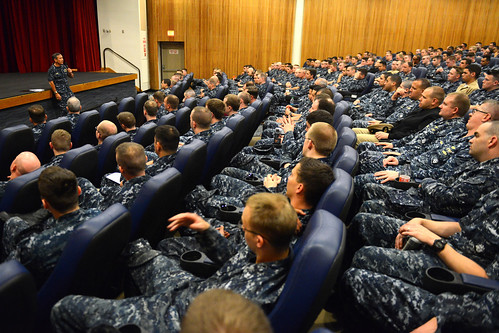