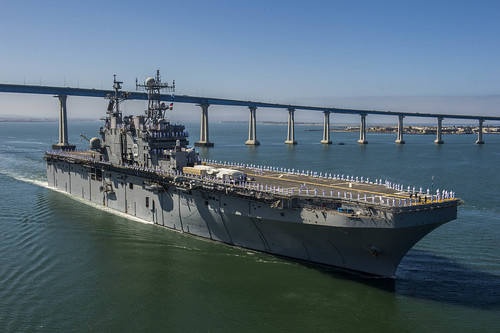 Peleliu will participate in exercise Rim of the Pacific (RIMPAC), a large multinational naval exercise, as the command ship for the expeditionary strike group. Following RIMPAC, Peleliu will conduct a scheduled deployment to the 7th Fleet AOR as part of Amphibious Squadron (PHIBRON) 11.

"Peleliu is ready for all assigned missions and any possible mission that could arise," said Capt. Paul C. Spedero, Jr., Peleliu's commanding officer. "While forward deployed, we are prepared to handle contingencies that may arise from conducting operations to supporting humanitarian assistance/disaster response or delivering combat power ashore, when necessary."

Peleliu and its crew of nearly 1,050 Sailors provides deterrence, promotes peace and security, preserves freedom of the seas, and provides humanitarian/disaster relief.

U.S. 3rd Fleet leads Naval Forces in the Eastern Pacific from the West Coast of North America to the International Dateline.